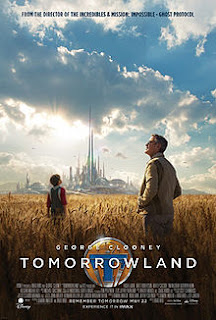 An adult Frank Walker and Casey Newton relate to the audience their experiences, beginning with Frank's visit to the 1964 New York World's Fair as a child. In the flashback, he meets David Nix, an official who is unimpressed with Frank's prototype jet pack. Frank does draw the attention of a young girl named Athena. Seeing his potential, Athena gives Frank a pin embossed with a "T" symbol and tells him to follow her aboard the fair's "It's a Small World" attraction. Frank sneaks onto the ride, where his pin is scanned and he is transported into a futuristic cityscape known as Tomorrowland. He falls from a ledge, but straps on his jet pack in mid air and lands safely before Nix and Athena.

The narration then shifts to the present, where Casey Newton sneaks into a decommissioned NASA launch pad in Cape Canaveral, where her father Eddie is an engineer. She sabotages the machines that are dismantling the launch pad and returns home, where Athena sneaks another pin that is programmed to Casey's DNA into Casey's motorcycle helmet. The next night, Casey attempts to break into the NASA compound again, but is arrested. At the police station, she sees the pin among her personal items, and discovers that upon contact, the pin instantly shows her a view of Tomorrowland that only she can see. She briefly explores the vision until the pin's battery runs out.

Assisted by her brother Nate, Casey finds a Houston memorabilia store related to the pin. Upon meeting the two owners, Hugo and Ursula, Casey is questioned about it, and when she says she knows nothing else about it, they attack her. Athena bursts in and fights Hugo and Ursula, who are both revealed to be robots. The two girls escape as the robots self-destruct, destroying the store. After stealing a car, Athena reveals that she is an Audio-Animatronic robot, and the one who gave Casey the pin, revealing that she needs her help to save the world. Athena drives Casey to Frank's home in Pittsfield, New York and leaves her there.

From the start, it was kinda clueless. Then midway through when it was engaging with all the fights and excitement, it was confusing, having no idea of what was actually happening. And then towards the end, all was revealed.

It may be dull at some point since there's a lot of dialogue, the overall movie was engaging for me, keeping me glued to the idiot box. It's basically a movie about the past, present and future of Earth, where humans evolved with the technologies and with so many dreamers emerging as time goes by. However, there's a moment where they mentioned of Mother Nature, how technologies are killing it slowly. Other than that, if given the opportunity, I would love to be getting that recruitment pin! The sci-fi in me will never say no :-)

The overall CGI was so realistic with the breathtaking view of Tomorrowland, though somewhat similar to The Jetsons. I also want to applaud Raffey Cassidy as she was so good as a robot! Especially towards the end... so touching! The only unrealistic part for me was the Eiffel Tower... it was a little overboard here though they've linked it to the likes of Tesla and Edison.