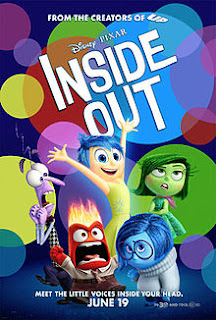 A girl named Riley Andersen is born in Minnesota and within her mind, five personifications of her basic emotions—Joy, Sadness, Fear, Disgust, and Anger—gradually come to life and influence her actions via a console in her mind's Headquarters. As she grows up, her experiences become memories, stored in colored orbs, which are sent into long-term memory each night. Her five most important "core memories" (all of which are happy ones) are housed in a hub that power "islands", each reflecting an aspect of her personality. In Headquarters, Joy acts as a de facto leader to maintain Riley's cheerful childhood, but as she and the other emotions do not understand Sadness' purpose (not even Sadness herself), she frequently tries to keep Sadness away from the console.

At the age of eleven, Riley and her parents move to San Francisco for her father's new business. Riley has poor first experiences: the new house is cramped and old, the moving van with all their belongings was misdirected, her father is under stress from his business, and a poor encounter at a pizza restaurant leaves her disheartened. When Sadness begins touching Riley's happy memories, turning them sad, Joy tries to guard them. On Riley's first day at her new school, Sadness accidentally causes Riley to cry in front of her class, creating a sad core memory. Joy, panicking, tries to dispose of it, but accidentally knocks the other core memories loose during a struggle with Sadness, deactivating the personality islands. Joy, Sadness, and the core memories are sucked out of Headquarters, and taken to the maze-like storage area of long-term memory.

Anger, Fear, and Disgust try to maintain Riley's emotional state in Joy's absence with disastrous results, distancing her from her parents, friends and hobbies, resulting in her personality islands gradually beginning to crumble and fall, one by one, into the "Memory Dump", an abyss where memories are forgotten. In desperation, Anger inserts an idea into the console prompting Riley to run away, believing that her return to Minnesota will enable her to make new happy core memories.

As far as I can remember, Pixar can never do any wrong. Their animations are usually so adorable with good plots and memorable characters. Inside Out is also one of them.

Teamwork is the main theme where Joy had to learn the hard way which makes up the story for this animation. Truly creative and entertaining with interesting characters that made up the 'emotions' within. This is another great animation to watch with the family!