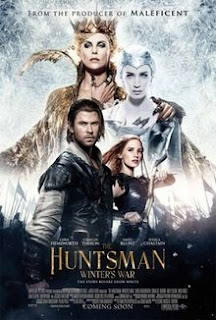 Long before her death, the evil Queen Ravenna (Charlize Theron) learns that her younger sister Freya (Emily Blunt) is not only engaged in an illicit affair with Andrew: Duke of Blackwood (Colin Morgan), but is carrying his child, who is destined to become fairest of them all. Sometime after Freya gives birth to a baby girl, Freya discovers that Andrew has murdered their child and, in a grief-fueled rage, kills him with her long-suppressed ice powers.

Freya abandons the kingdom and builds herself a solitary ice palace deep in the north, murdering anyone who opposes her while amassing an army of children and training them so their hearts will be forever hardened. Eric (Chris Hemsworth) and Sara (Jessica Chastain), two of her most exceptional warriors, fall in love and plan to elope, only to learn that Freya is aware of their secret. She confronts them and creates a massive ice wall to separate them before forcing Eric to watch as Sara is killed by her fellow huntsmen.

Seven years after Ravenna's death, King William of Tabor comes across Eric and informs him that the Magic Mirror was taken while en route to a place known as "Sanctuary". Eric reluctantly sets off with Snow White's dwarf ally Nion (Nick Frost) and his half-brother Gryff (Rob Brydon) to find the Magic Mirror. Eric becomes aware that Freya has been secretly observing their conversation through a mask that projects her consciousness in the form of a Snowy owl, and he destroys it.

Firstly, I really enjoyed Liam Neeson’s narration. It was clear and captivating, so matching with the genre, a historical movie at that. His voice reminded me of Lord of the Rings/ Hobbit/ Merlin LOL!

Back to the movie, it’s basically spoken in historical slang as such much attention is needed while watching it. It has a good story line, flowing from before and after so it was easy to follow along. Loved the cinematography scenes and action filled plots which were entertaining.

Ravenna's and Freya's presence in the movie was distinct as the evil queens though on a different scale. I loved their costumes... especially Ravenna's gold coloured ones, such grandeur and elegance.

Eric and Sara, the lovebirds, were the epitome of the story. Having survived all the obstacles they encountered and be together in the end. Love definitely conquers all.

I felt that this movie is better than the first one. Maybe because Kristen Stewart is not in this movie. Also, I liked the combination of Snow White and Snow Queen together. Hence the story has more gist than the previous one. Overall an enjoyable movie to watch.

Category: A 2016 American high fantasy action adventure film based on characters from the German fairy tale "Snow White" compiled by the Brothers Grimm, as well as "The Snow Queen" by Hans Christian Andersen.
Email ThisBlogThis!Share to TwitterShare to FacebookShare to Pinterest
Sections: Movies