You're on which team? Captain America: Civil War #atozchallenge 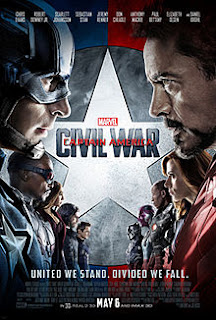 Somewhere in Siberia in 1991, Hydra revives James Buchanan "Bucky" Barnes from his decades-long sleep and transforms him into the Winter Soldier, equipping him with a robotic left arm and brainwashing him to be completely obedient to anyone who recites certain trigger words to him. He is then sent to assassinate a motorist and steal a briefcase filled with bags of Super Soldier serum.

In the present, Steve Rogers (aka Captain America), Natasha Romanoff (aka Black Widow), Sam Wilson (aka Falcon) and Wanda Maximoff (aka Scarlet Witch) stop a terrorist group led by Brock Rumlow (aka Crossbones) from stealing a biological weapon from a lab in Lagos, Nigeria. In the fight, a building is accidentally bombed, killing a number of Wakandan relief aid workers.

After giving a speech at MIT, Tony Stark (aka Iron Man) is confronted by a grieving mother whose son was killed in the battle in Sokovia with Ultron. Back at their headquarters, the Avengers are paid a visit by Secretary of State Thaddeus "Thunderbolt" Ross, who informs them that the United Nations is in the process of passing the "Sokovia Accords", which will establish an international governing body to monitor and police the rapidly growing number of superhumans. The team is divided over the act; Stark supports government oversight because he feels guilty for his role in creating Ultron, whereas Rogers has become wary of government after Hydra infiltrated and manipulated S.H.I.E.L.D.

Fully action-packed, very entertaining, somewhat witty yet touching with superb storyline! It was so totally worthwhile watching it in the cinema. So many emotions... so many superheroes... so little time ahahaha!

All the teasers of which team you will be on... the marketing gimmicks, etc... definitely makes more sense than Batman V Superman. The few intense scenes where Iron Man and Captain America verbally assault and then fight were nerve wrecking with the tensions building up until it blew up in the end! Either way, both were right on their grounds with valid reasons but one has the upper edge with more validity.

So so so entertaining with new superheroes like Black Panther, Ant Man and not forgetting Spiderman! Also returning was Hawkeye! It was definitely a non-stop 2.5 hours of excitement! Not forgetting the stunts and fights which seemed so real... I think they did most of the stunts themselves! Plus the new cool gadgets Tony Starks have... damn... loved it especially when he suited up in his helicopter!

Some say there were 2 post credit scenes but we've only watched the first one which was mid credit. It was just too late to wait for the next one, if there's any, which could be at the very end so we'll save that for when we could watch it at home. Apparently this is the last of the trilogy so... sad... nothing to look forward to now but at least Steve has his closure.

Update: finally watched the last post credit scene, which is right at the end, and it is actually an intro to the new Spiderman movie!

Lastly, I noticed lately this trend where youngsters just loved talking during the movie... as though they were narrators. Honestly, it's damn bloody annoying! I've paid a good chunk to enjoy the movie and not listen to your narrations damn it! Can you please stay at home if you can't shut up through out the movie?