View of mine: London has fallen #atozchallenge 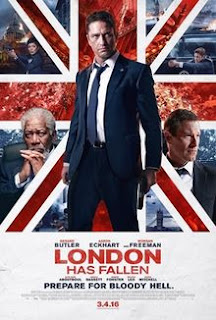 A Pakistani arms dealer and terrorist leader named Aamir Barkawi (Alon Moni Aboutboul) is discovered to be the mastermind behind several terrorist attacks around the world. Western intelligence services locate his compound and the United States launches a drone strike against it, supposedly killing Barkawi along with his family. Two years later, Mike Banning (Gerard Butler), Secret Service agent for President Benjamin Asher (Aaron Eckhart), is expecting his first child with his wife Leah (Radha Mitchell). He hopes to spend more time with his family, and is contemplating resigning from the Secret Service. Meanwhile, having survived the earlier airstrike, Barkawi meets his son Kamran (Waleed Zuaiter) in Yemen so that the pair may set in motion their plans for revenge.

Asher and Mike are informed that the British Prime Minister James Wilson has died. Along with Secret Service Director Lynne Jacobs (Angela Bassett), they travel to London to join many other prominent world leaders for Wilson's state funeral. As the dignitaries are arriving, several mercenaries under Barkawi's command initiate an attack, starting with a bomb that destroys the Canadian Prime Minister's limo as it passes through Trafalgar Square, killing him and his wife. Other leaders soon suffer a similar fate – the Japanese Prime Minister drowns when suicide bombers cause Chelsea Bridge to collapse, the French President perishes in a huge bomb blast on the River Thames that destroys his yacht and heavily damages Big Ben and the Palace of Westminster, the Italian Prime Minister and his wife are killed when one of Westminster Abbey's bell towers is demolished while they are touring it, and the German Chancellor is shot dead by terrorists posing as Queen's Guardsmen at Buckingham Palace. Meanwhile, Asher and the Secret Service men with him are engaged in a firefight by yet more terrorists disguised as British Police and other emergency responders. Both sides suffer heavy losses before Banning, Asher and Jacobs narrowly escape the chaos. The president's staff back at the White House watch in horror as London is left in chaos and hundreds of civilians are killed.

At their base of operations, the terrorists hack into the city's power network, effectively shutting it down. Banning, Asher and Jacobs head to Marine One for extraction. However, terrorists positioned on building rooftops use Stinger missiles to take out the decoy helicopters before shooting down Marine One. The aircraft crash-lands in a park, resulting in Jacobs being fatally wounded; she dies in Mike's arms after making him promise to kill those responsible for the carnage. Mike and Asher go on the run, fleeing into the deactivated London Underground to get off of the streets. As they move through the underground tunnels, Asher notes that the terrorists want to capture him alive so that he may be executed publicly, and orders Mike to kill him if necessary to stop that from happening. Mike reluctantly agrees. As they move across the city, Mike manages to discreetly contact Vice President Allan Trumbull (Morgan Freeman) and send the White House a message to let them know that he and Asher are heading for an MI6 safehouse in the city.

Same old, same old plots. Terrorists planned months ahead. Presidents and prime ministers walked into the trap. US president and agent survived and escaped without a scathe plus killed most of the terrorists. They lived.

The only difference this time is that the president was also involved in the actions with the agent more foul-mouthed than ever. Other than that, the plots were still predictable but thankfully, the actions were exciting and entertaining with the many bomb flicks and fights.