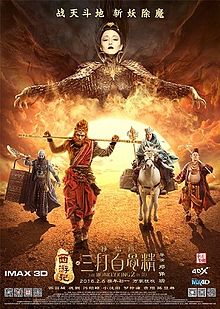 The film is based on selected chapters of Wu Cheng'en's classical novel Journey to the West and will tell the story of how the young monk Tang Sanzang's travels brings him to the Five fingers mountain and meets Sun Wukong where he's trapped beneath. It is there that they will form a bond as Master and disciple. In their travels, they will also meet Zhu Ba Jie and Sha Wu Jing whom also become the disciples of Sanzang and join them in their travels to Leiyin Temple at Vulture Peak in India to collect scriptures to bring back to Chang An. This sequel, will focus on the story arc of the White Bone Demon who is hell bent on consuming San Zang, because this will grant her Demon-hood for all eternity as she did not want to go through reincarnation.


The above taken from Wikipedia.

What can I say? It's so unrealistic with too much CGI for the movie to be believable. It felt like an animation instead. Sad that it's in Mandarin so the banana me had to keep reading the subtitles.

Fortunately the casts were good so I was still entertained. I was hoping Donnie Yen would resumed the role so I was mildly surprised that the monkey king was Aaron Kwok instead! It definitely didn't looked like him at all so bravo to the make-up artist... truly an amazing job!