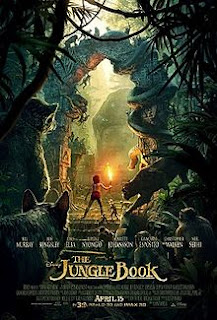 Mowgli (Neel Sethi) is a man-cub raised by the Indian wolf couple Raksha (Lupita Nyong'o) and Akela (Giancarlo Esposito) ever since he was brought to them as a baby by the black panther Bagheera (Ben Kingsley). Bagheera trains Mowgli to learn the ways of the wolves but Mowgli faces certain challenges and lags behind his wolf siblings, and Bagheera berates him for using human tricks like tool building, instead of learning the ways of the pack.

One day, during the dry season, all the animals in the jungle gather at the Peace Rock to drink the water that remains, as part of the Water Truce, abiding by the "Law of the Land" to not devour one another. The peaceful gathering is disrupted when the fearsome Bengal tiger Shere Khan (Idris Elba) makes his presence felt. He detects Mowgli's scent amongst the crowd and threatens his life since man is not welcome in the jungle. He holds the scars on his face as proof of man's cruel and destructive nature and issues a warning that when the Water Truce ends and the Peace Rock disappears, he will come for the boy and that the wolves should decide how many of their own kind they would be willing to sacrifice to protect a man-cub. Thus a debate and argument arises amongst the members of the wolf pack as to whether or not they should keep Mowgli. But before a general consensus is reached, Mowgli voluntarily decides to leave the jungle for the sake and safety of his pack. Bagheera volunteers to guide him to the human civilization.

However, en-route, Shere Khan ambushes them, injuring Bagheera while Mowgli manages to escape with the help of a herd of buffaloes. Mowgli, now alone, stumbles upon a thick canopy where he meets Kaa (Scarlett Johansson), an enormous Indian python who lures him in with promises of safety and an assurance that she knows who and what Mowgli truly is. Kaa's hypnosis shows Mowgli a vision of his father being killed by Shere Khan and of himself as an abandoned infant being found by Bagheera. Kaa's vision also warns of the destructive power of man's "red flower", a tool that "brings warmth and light and destruction to all that it touches". Having successfully wrapped Mowgli in her coils, Kaa attempts to devour Mowgli, but he is rescued by Baloo (Bill Murray), a bear.

I am totally blown away with this movie. I am still reeling in the fact that a young newcomer acted with great gusto and made the whole movie so believable. Neel Sethi is the real deal. Apparently, the sequel is in the making currently so I wonder if the main casts are the same.

Anyway, anyone who knows me knew that I am an avid reader. So surprisingly, I have not read The Jungle Book before *cricket sound*. Well, I don't own one and I've not rented it from the library before... I guess it just doesn't capture me, unlike Enid Blyton.

So watching this movie with a fresh mind is truly engaging and entertaining. Plus with a mind blowing casts, it was an extraordinary movie! Not forgetting the seamless CGI, so so so real and believable! It may not be realistic having a pack of wolves raising a boy but it's a thought worth pondering. It also touches on the eco system and green earth... very educational indeed.