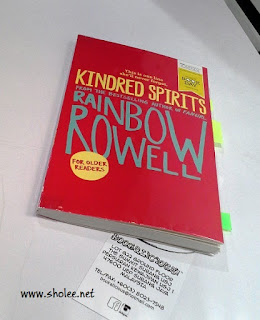 If you broke Elena's heart, Star Wars would spill out. So when she decides to queue outside her local cinema to see the new movie, she's expecting a celebration with crowds of people who love Han, Luke and Leia just as much as she does. What she's not expecting is to be last in a line of only three people; to have to pee into a collectible Star Wars soda cup behind a dumpster or to meet that unlikely someone who just might truly understand the way she feels. Kindred Spirits is an engaging short story by Rainbow Rowell, author of the bestselling Eleanor & Park, Fangirl and Carry On, and is part of a handful of selected short reads specially produced for World Book Day.

A Jedi uses the Force for knowledge and defense, never for attack - Yoda

A novella of Star Wars, Starbucks and Mean Girls. It's about Elena who is a Star Wars fan experiencing her first camp line, queueing for the movie premier. To her disappointment, she was only the third in line but then she's 4 days early. Over there, she met Troy, the first in line, who made her experience more fulfilling and Gabe, the second in line, who made her realised there were more to it in life.

It's short, sweet and funny. A poignant tale of a girl experiencing life's meaning of friendship and trolls. Truly meaningful and engaging, Rowell's prose is simple yet beautiful, her relayed message subtle yet powerful. There is definitely a new beginning at the end which I really loved.

The whole short story is for young adults, not sure why there's a teaser on the cover 'For older readers'. I guess it's referring to an intro of Beautiful Broken Things by Sara Barnard towards the end of the book. However not much was revealed except that it has a leniency towards lesbianism. Other than that, it sounded like any other BFF story. I guess I would need to read that book to know more but somehow it's not my cup of tea. Not the story itself but the way it's written... it didn't attract me much.

Anyway, Kindred Spirit is my first Rainbow Rowell read and I honestly enjoyed it! Time to dig out her other books from my 'to be read' piles... I think I do have another book or 2 of hers.