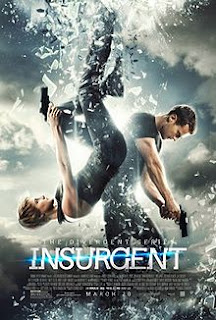 The story begins five days after the assault on the Abnegation faction by Erudite leader Jeanine (Kate Winslet) and her mind-controlled Dauntless soldiers. Jeanine has declared martial law and that the Divergents – those with the qualities of multiple factions – and those allied with them are the enemy. Among the Abnegation wreckage, Dauntless leader Eric and his platoon recover a five-sided box: each side has a faction symbol. Jeanine presumes it contains data from the city's founders and the means to end the Divergence problem. As only a Divergent is capable of opening the box, she orders the capture of all Divergents.

Tris (Shailene Woodley), Four (Theo James), Peter (Miles Teller), and Caleb (Ansel Elgort) hide within the Amity compound. Soon after, Eric and his fleet arrive to test all the occupants for Divergence. Peter gives up the group's location as Tris, Four, and Caleb escape and board a train headed into Factionless territory. After fights with the Factionless aboard, Four reveals his name–Tobias Eaton–which prompts the Factionless to stand down and reply that they have been searching for him.

Four, Tris and Caleb are given amnesty at Factionless. There, Tris and Caleb discover that the Factionless leader is Four's mother, Evelyn (Naomi Watts). She suggests that Dauntless and Factionless should ally against Erudite, but Four declines. The next morning, the three leave Factionless for Candor to meet up with the remaining Dauntless; during the trek, Caleb tells his sister Tris that he cannot continue with them and goes in a different direction. Upon arrival, Tris and Four are arrested and brought before Candor leader Jack Kang, who intends to deliver them to Jeanine. However, Four pleads for Jack to conduct a trial in Candor with the use of truth serum. During the trial, Four communicates his motives and is absolved. Tris tearfully admits her guilt in shooting and killing Will, which angers Christina.

This second part of the Divergent trilogy was a *yawn* for me. It actually took me a few months to finish watching this movie. Mostly slow with predictable plots and nothing outstanding to pull me into the movie. I am beginning to think that dystopian genre is not my cup of tea.