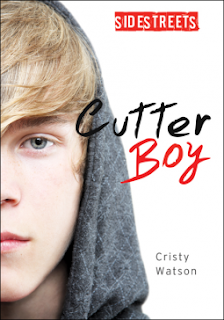 All Travis wants is a slice of life.

Bullied at school and ignored at home, Travis has a secret: cutting himself with a razor blade is the only thing that lets him control the pain in his life and find some peace. When he becomes friends with Chyvonne, a new girl at school, he doesn't know how to get close to her without revealing his secret and making himself even more vulnerable. Spending time with Chyvonne spurs Travis to try to discover why his mother can't seem to face his very existence. It's only when he learns about the art form of paper cutting that he realizes there might be other ways to make himself feel adrenalin-fueled and in control.

Although self-harm through cutting is a problem usually associated with teenage girls, many young men are involved in different sorts of self-injury. This story explores a teenager's motivations for cutting and the options for overcoming the need to self-injure.

The above taken from Goodreads. Goodreads rating: 3.72

Note: I have gotten the e-ARC from the publisher via NetGalley in exchange of my point of view.

To be honest, I was captivated by the title 'Cutter Boy' and not the Bieber looking boy on the cover. I was also curious after reading the synopsis especially about cutting one self. I have always wonder what goes through the mind of a cutter hence the request for this e-ARC. I am aware this is fiction but upon reading the author's profile, Cristy Watson is a teacher so I believe she does encounter such issue personally.

Cutter Boy tells a story of a loner who's bullied in school, neglected at home and releases his angst by cutting himself. He prides his cuttings as his masterpiece, his work of art until the day his teacher introduced him to paper cutting. That actually brought it to another level and helped pared down his self-cutting. With the help of his new found friend Chyvonne, Travis managed to overcome the urge to self-cut and also communicate with his family instead of running to hide.

True to my thoughts, it's written with clarity, honest and definitely a good motivational book for the young adults. It may not be filled with excitement but it depicted the truthful, genuine emotional roller coaster of a troubled teenager. I can feel his anger, his pain, his turbulent life. At such a tender age, having to endure so much when he should be enjoying it to the fullest.

Spoiler alert! Just a thought, since Travis is the product of rape, they could use his DNA to nab the perpetrator. Then his mom would have closure... *I'm still reeling in from the book* moment LOL!

Cristy truly captured it all like the emotions not only from Travis but his parents as well, especially his mom still in denial stage. Well written and straightforward. A recommended light read for such a heavy issue.