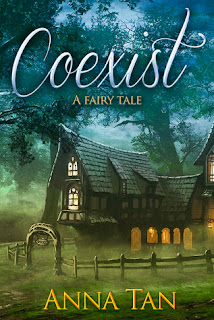 Jane Hays has been told all her life that it’s dangerous to be out in the forest past sundown. At fifteen, she’s quite sure that it’s all old wives’ tales... yet, why does her village bar the gates every night? Why do they even have gates? When she is caught in an unexpected rainstorm on her way home, Jane ignores all the warnings and seeks shelter in a cottage in the middle of the forest. Soon, she is caught up in a world of magic and beauty – and in the storm of the Fairy Queen’s wrath.

The Fairy Queen is out for blood. There have been intruders - human intruders - in her domain and she will stop at nothing to find them and kill them. After all, it is only fair. She is only seeking retribution for the death that humans leave in their wake.

But Jane isn’t all that she seems to be. And the events of the night aren’t as innocent as they appear.

A tale of magic, fairy creatures and family, Coexist is a novella for the young and the young-at-heart.

Firstly, I was actually mislead by the title, thinking it was a sci-fi romance. Once I saw the details on Goodreads, only then I realised it's actually a magical fantasy! Nice cover too!

Overall, it was a good read with a good attempt in magical fantasy. I've read another short story from this author, When Winds Blow Cold, and it was really good. However, in this story, it fell short a little and felt a little rushed at times. Not sure if it's the prose or the dialogue, it somehow didn't grasped me as much into the fairy tale. Somewhat crude, not as refined as I would have preferred.

I noticed the similarity of the magical creatures from the likes of Narnia featured in this story. Thankfully, it stopped there. On the contrary, with an authentic storyline seemingly combined with the local folklore, it's an entertaining read with some humanity touch in it... along the lines of saving the earth and profiteering human destroyers. I do like the mix of human values in the guise of magical creatures... it's worth exploring.