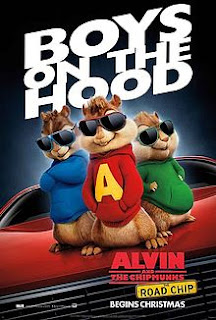 The film begins with Alvin (Justin Long), Simon (Matthew Gray Gubler), and Theodore (Jesse McCartney), along with The Chipettes - Brittany (Christina Applegate), Jeanette (Anna Faris) and Eleanor (Kaley Cuoco) - setting up a surprise birthday bash for Dave (Jason Lee). Alvin invites and hires many people and celebrities to the dismay of Simon, before Dave returns home in dissatisfaction. Dave is disappointed in them, but agrees to take them to mini-golf, and meet the woman he has been dating for the past few months. While the Chipmunks like Samantha (Kimberly Williams-Paisley), her son Miles (Josh Green) is a bully who physically abuses the trio. Later, the Chipmunks find an engagement ring in a bag Dave brought home and believe that he's going to propose to Samantha. They try to steal the ring but are unsuccessful.

Dave has to produce a record for Ashley Grey (Bella Thorne) in Miami and decides to bring Samantha along with him. The Chipmunks and Miles are staying together, but they agree to head to Miami to sabotage the proposal. The Chipmunks drug three squirrels and dress them up in their clothes to fool their hard of seeing neighbor Ms. Price (Jennifer Coolidge), who was tasked with looking after them. The Chipmunks travel on a plane, but Alvin lets out several animals which cause an emergency landing and brings the ire of Air Marshall James Suggs (Tony Hale), who has a personal vendetta against the Chipmunks (Suggs' girlfriend left him while "The Chipmunk Song (Christmas Don't Be Late)" played in the background).

The Chipmunks head to a bar and perform, but this is interrupted by Suggs and they cause a bar brawl as a diversion. After the cab driver (Mark Jeffrey Miller) learns they can't pay him, he kicks the four out of the cab. The Chipmunks and Miles rest, and he reveals that his dad left him when he was five years old. They raise money to take a bus to New Orleans, and sing "Uptown Funk", which gets the attention of Dave when it is broadcast on live television. Meanwhile, Suggs gets drunk and wakes up to find that he got two tattoos, one of Alvin and the Chipmunks on his back.

This movie is hilarious! I seemed to be laughing from the start of the movie to the end but the cinema was a little quiet. Apparently the other patrons didn't find it funny enough I guess. A light, twisted plot, atypical of the Chipmunks so don't hope for otherwise. I know my kids loved it! Definitely family oriented so have fun with your young ones watching this movie! IMO including my kids, it is the best chipmunks movie compared to the previous ones. Truly entertaining!