MPOV: Forest of the Pygmies 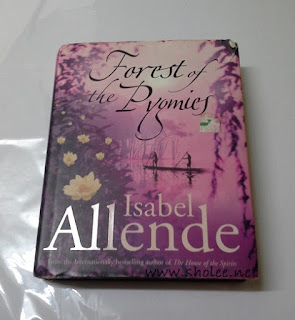 Kate Cold, an International Geographic reporter, is on safari in Kenya with her grandson Alex and his friend Nadia. They soon meet Angie Ninderera, a bold and seductive pilot, and Brother Fernando, a Catholic missionary who needs to reach a jungle-girt village called Ngoubé; its people are tended to by his friars. In a recent letter his friars described him their toil and the dangers they were facing due to the chiefs’ disesteem for their presence. Some time ago these chiefs—King Kosongo, commandant Mbembelé and sorcerer Sombe—seized Ngoubé, toppled its queen, and subjected its people to ceaseless attrition. Kate and her friends agree to help despite Fernando’s and Angie’s rows.

Once in the village, they masquerade as reporters who wish to interview the king on his “famed power and wisdom,” but Kosongo has them locked in a sentineled, empty hut. Nadia slinks out to the village’s women, who have been living in jail while the males have become cruel spies. She and Alex flee to find the queen and the pygmies, who all vow to mutiny.

A fleet-footed pygmy duels and tires the commandant, who is chased off by Alex in his jaguar form. Sombe appears to quell the revolt, but Nadia appears along with the queen and a group of powerful friends. The foe is vanquished, and when Angie removes his mask, it turns out that he, Mbembelé and Kosongo are one. The man is tossed to the crocodiles.

Fernando says he will help the locals rebuild their lives, and Angie succeeds in phoning a friend of hers, who agrees to pick up her and the others.


Two years later: Alexander is a medical student at Berkeley, and Nadia is at last willing to go to college, too. He lands in New York, where Nadia and Kate share a flat, to take his friend to a ceremony. It turns out that Kate has written three books on their adventures.


After speed reading through, slowed down at the last few chapters where the actual adventure began. I felt like I was reading a magical Dora and the Explorer. Perhaps the translation wasn't as smooth but the storyline was predictable at some point.

This is actually book 3 of a trilogy. Book 1 is City of the Beasts and book 2 is Kingdom of the Golden Dragon. Unfortunately, it is not my cup of tea.