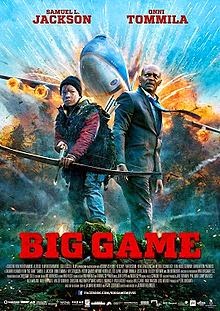 When Air Force One is shot down by terrorists leaving the President of the United States Alan Moore (Samuel L. Jackson) stranded in the wilderness of Finland, there is only one person around who can save him: a 13-year old boy called Oskari (Onni Tommila). In the forest on a hunting mission to prove his maturity to his kinsfolk, Oskari had been planning to track down a deer, but instead discovers the most powerful man on the planet in an escape pod. With the terrorists closing in to capture their own "Big Game" prize while Pentagon officials watch on satellite broadcast- including the Vice-President, the CIA director, and former CIA field operative Herbert, brought in as a consultant- the unlikely duo must team up to escape their hunters.


Already feeling at a disadvantage as a hunter due to his father's reputation- his father having hunted and defeated a bear on his own hunt- Oskari's faith in himself is further shattered when he follows a map his father left him only to find a portable refrigeration unit with a pre-killed deer head in it. Moore attempts to boost Oskari's confidence by reminding Oskari that he managed to save him, but they are subsequently confronted by Morris, the Secret Service member who orchestrated the attack from on board Air Force One- having become disillusioned with Moore as president after sustaining a bullet-wound that left a fragment of shrapnel near his heart- and Hazar, the mercenary Morris hired to kill Moore. Although Hazar decides to put Moore in the refrigeration unit and take him home to kill, Oskari regains his confidence and leaps onto the unit before it can be carried away, cutting it loose from the helicopter and hiding inside it as it rolls down a mountain to land in a river.

Realising that the river leads to the lake where Air Force One crashed, Moore and Oskari swim inside the plane to wait for rescue, but are attacked by Hazar, who reveals that he has new orders to kill the President now rather than torture him for later execution. Moore manages to grab a gun and shoot Hazar before he and Oskari escape Air Force One via the ejector seats, Oskari subsequently shooting Morris with an arrow as the ex-bodyguard leans out of a helicopter to shoot at them; although the arrow cannot pierce the protective padding on Morris's chest, the impact dislodges the shrapnel inside Morris so that it impales his heart. The explosion of Air Force One destroys Morris's helicopter and sends Moore and Oskari flying all the way back to the camp where Oskari's village is waiting for him, arriving at the same time as the Navy SEAL team sent to search for Moore. With Moore acting as Oskari's 'prize', he assures Oskari's father that his son is the bravest man he has ever met, with Oskari subsequently receiving the Medal of Honor for saving Moore's life.

An entertaining movie. Just hard to believe Samuel is helpless, more of a weakling, in this movie! The boy is rather adorable, Onni I think, which made the movie more entertaining. Thoroughly enjoyed this light action adventure movie. Actually more of a comedy to think of it.