Trash To Treasure: feedback and update

Participated in this Trash To Treasure Event last weekend (it was my first) and managed to clear some of my stash, thankfully! Most importantly, I managed to cover my rental for both days, gross and not nett ya since I was clearing my old stocks hence very steep margin. Anyway, the concept was unique, different from others which is why I wanted to share it including my experiences, both good and bad. 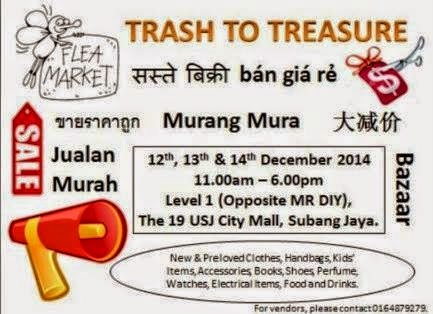 I got to know this event from 1 of the Facebook groups I've joined, unfortunately I can't recall which one. Thought of giving it a try since I've not participated in any this year and I really do have loads of old stocks to clear. My first thought was negative, 19 USJ City Mall??? I realized the last time I've been to this mall, it was a digital mall then and it was so empty! The change of name indicating a revamped mall so many questions were floating in my mind like will there be crowd?, will there be marketing and awareness of this event?, is it worth it?. In the end, I thought I have nothing to lose since the package itself was cheap and worthwhile i.e. rental for a table is inclusive of a lunch set. Since I require 2 tables, I would get 2 sets. It's a win win situation lah...

I contacted the organizer via Facebook messenger and everything was sorted out promptly. Just waited for the day to arrive positively and praying for a smooth event. Honestly, I did have a high expectation since Christmas is just around the corner. So when the day arrived, I was a little flustered. Why? Well...

Thank goodness, the organizer (a young married couple) were friendly, attentive and very hands-on. They actually owned a restaurant downstairs, Platter Houz, where our lunch sets were from. A very smart move collaborating with the mall to incorporate rent + food in the package. A win win situation for both the management and the organizers. I don't mind since there wasn't much crowd hence with the meal compensating the rent is a huge plus for me. It's not just a simple local dish ya, it's actually western! Honestly, their lunch sets were cheap and really delicious. At RM9.90 per set, you have options of fish & chips, spaghetti or fried rice with a glass of iced or hot honey lemon juice.
I didn't snap Angel's orders though but they were totally enjoying it! Fish & chips and spaghetti marinara with both switching their orders on both days LOL! We also get free flow of sky juice, so you tell me, where got such good deal for vendors? As long as I was able to cover my rental, I'm happy as a clam as I would also get to clear my stocks and not leaving it stagnant. Hence, hubs immediately decided for me to continue this weekend! It's a win win situation so why not?

Yes, the organizer has decided to continue it as a weekly event and I'll be participating it this weekend too. So my dear friends, family and readers, please drop by my booth at Level 1, 19 USJ City Mall (Mr. DIY side) this coming weekend, 20th and 21st December 2014, from 11am to 9pm for your last minute Christmas shopping, etc! It's the last weekend to shop for Christmas and I still have loads of stock to clear at very cheap price! Fret not, I do have some gift bags and boxes if required. So come one, come all!!!
Email ThisBlogThis!Share to TwitterShare to FacebookShare to Pinterest
Sections: Events