MPOV: Step Up All In 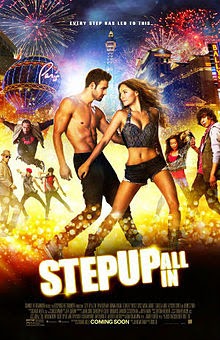 Sean (Ryan Guzman) and his crew the Mob from the previous film are in Los Angeles trying to make a living from dancing, but are turned down at every audition. After being refused at another audition, the Mob visit a club where they are noticed and challenged to a dance battle by another crew, the Grim Knights. The Grim Knights win the battle and the Mob decides to pack up and leave Los Angeles and return to Miami, thinking there is nothing left for them and that they aren't ready for Los Angeles.

Sean decides to stay and while there, he notices a dance competition called The Vortex taking place, inspiring him to put together a new crew with help from Moose (Adam Sevani, from the previous Step Up films). Moose gets Sean a job working as a janitor in a dance center owned by Moose's grandparents, where Sean takes up residence in a janitor's closet. Sean and Moose recruit Andie West (Briana Evigan, from Step Up 2: The Streets) and later, Vladd (Chadd Smith), Violet (Paris Goebel), the Santiago Twins (Facundo and Martin Lombard), Monster (Luis Rosado), Hair (Christopher Scott), Gauge (Cyrus "Glitch" Spencer), Jenny Kido (Mari Koda), and Chad (David "Kid David" Shreibman) to the crew. The group soon makes an audition video as the LMNTRIX and are accepted into the competition a few weeks later.

The crew heads to Las Vegas to compete. Upon arriving, Sean finds out that both the Grim Knights and the Mob are also in the competition, motivating the LMNTRIX to practice extra hard. While the rest of the crew are at a bar, Sean and Andie reveal they have broken up with their respective partners. Moose kisses another girl while freestyle dancing at the bar, which his girlfriend Camille (Alyson Stoner) witnesses. She runs off, prompting Moose to leave the crew and return to Los Angeles to make up with her. The LMNTRIX battle the Mob in a Vortex exhibition match; during the battle, Sean tries to force Andie to perform a trick they tried during one of their practices but Andie refuses and leaves. The LMNTRIX, however, still win the battle and the Mob leave, angry at Sean. Sean finds Andie outside, where she confronts him about his actions. Sean realize that he has made a lot of mistakes; he apologizes to the Mob and later makes up with Andie and the crew.

To be honest, the storyline is so so only... kinda boring... expected plots. The only entertaining part is the dancing... superb choreography and dance moves. Nothing much to comment except for just be entertained by the dances. The only cool part was I recognized some of the dancers from SYTYCD! Including the infamous choreographers Christopher Scott and Adam Shankman!