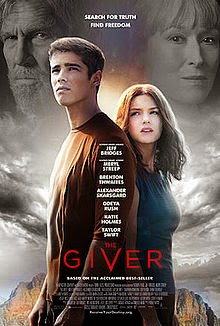 Jonas is a 16 year old teenager who is anxious about the job he will be assigned (along with everyone else). He has two best friends: Asher and Fiona.

On the day of graduation, Everyone is assigned their jobs. Jonas is briefly skipped, as he has not been assigned a job. Instead, Jonas is to become the next Receiver of Memory, and progressively receive memories from the past receiver, The Giver. Upon assuming his role as The Receiver, Jonas learns of the Giver's past and of his child, Rosemary. She preceded Jonas as Receiver of Memory, and was so distraught from the memories that she committed suicide, by what the Community call releasing. They regard its nature as mysterious; the audience learn that it is death by lethal injection. Jonas begins to teach his findings to his friend Fiona, who he decides to share the idea of feelings with. Fiona is unsure of how she feels about feelings, but they kiss while together privately.

Jonas also shares his memories with the baby his father brought home to their house, Gabe, and develops a close relationship with him after discovering he shares the same mark on his wrist Jonas does, the mark of a potential Receiver of Memory. Jonas decides that everyone should have the memories of the past and eventually, the Giver and Jonas decide that the only way they can help the community is to go past the border of what they call Elsewhere, beyond the community, therefore releasing the memories back into the community. Jonas sneaks out at curfew, and decides to get Gabe at the Nurturing Center, who is to be released of weakness. Asher, his other longtime friend besides Fiona, tries to stop him before he leaves the neighborhood, but Jonas quickly punches him. Asher lies on the ground, stunned, and Jonas rides his bike to the Nurturing Center. He tells Fiona his plan and wants to take her with him, but she refuses and instead helps him retrieve Gabe. Before he leaves, she kisses him and helps him escape.

I actually liked this movie... how it was portrayed... the way the story unfolds... I was intrigued with their monotonous lifestyle. The ending is somewhat a giver... a little illogical but overall a good movie to watch. I was surprised it didn't hit high on our cinemas, perhaps they just don't like listening to a movie *shrugs*