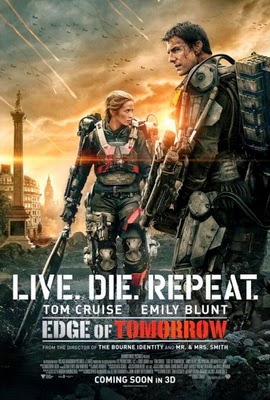 A race of aliens called Mimics has taken over continental Europe. General Brigham (Brendan Gleeson), head of humanity's United Defense Force, orders Major William Cage (Tom Cruise), a public affairs officer and former advertising executive, to cover combat on the beaches of France during the next day's assault on the Mimics. Cage objects to the dangerous assignment and threatens to use his public relations skills to turn the public against Brigham when the casualties start increasing from the invasion. But General Brigham doesn't take kindly to this blatant attempt at blackmail and has the impertinent Major arrested. Cage is knocked out during an ensuing escape attempt. He wakes in handcuffs at a forward operating base at Heathrow Airport and discovers he has been labeled a deserter and put on combat duty for the invasion under the command of Master Sergeant Farell (Bill Paxton).

The invasion is a disaster for the humans. Cage manages to kill a large Mimic but dies as he is sprayed with its acid-like blood. He then wakes up at Heathrow the previous morning. No one believes his story that he knows the invasion will fail. He repeats the loop of dying on the beach and waking at Heathrow until he encounters Sergeant Rita Vrataski (Emily Blunt). She recognizes his ability to anticipate events and tells him to locate her the next time he "wakes up".
Cage finds Vrataski at Heathrow. Together they meet up with Dr. Carter (Noah Taylor), a former government scientist and expert in Mimic biology. Cage learns that the kind of Mimic he killed in his first loop, an "Alpha", resets time when it is killed to give the Mimics an advantage in battle. Cage inherited this ability when he was doused in the Alpha's blood as they both died. Vrataski had this ability in a previous battle but lost it after receiving a blood transfusion. She tells Cage that they must hunt the Mimics' hive mind, the Omega.
The above taken from Wikipedia.
This movie did not attracted me hence the much delayed watching LOL! Well, ok lah, action packed, interesting storyline which was quite different but aliens again. Luckily, this time alien is not the main attraction, man is. A good movie to watch... I liked the way time keeps looping each time Cage dies and re-experiment the future.
Rating: 3/5
Directed by Doug Liman
Starring Tom Cruise, Emily Blunt, Bill Paxton, Brendan Gleeson
Genre: 2014 American science fiction film based on a screenplay adapted from the Japanese light novel All You Need Is Kill byHiroshi Sakurazaka
Email ThisBlogThis!Share to TwitterShare to FacebookShare to Pinterest
Sections: Movies