MPOV: The Fault in Our Stars 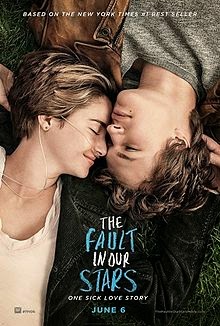 Hazel Grace Lancaster (Shailene Woodley) is an intelligent and sarcastic Indianapolis teenager coping with terminal thyroid cancer that has metastasized to her lungs. Believing her to be depressed, Hazel's mother urges her to attend a cancer patients' support group at a local church to make friends. During a support meeting, Hazel meets Augustus Waters (Ansel Elgort), a teen who had suffered from osteosarcoma which caused him to lose his leg. The two bond immediately after the meeting and Augustus invites Hazel to his house where the two bond over their similar interests and views on cancer. Before departing, the two agree to read each other's favorite novels. Hazel recommends to Augustus An Imperial Affliction, a novel about a cancer-stricken girl named Anna that parallels Hazel's own experience. After Augustus finishes reading her book, he is frustrated upon learning that the novel ends abruptly without a conclusion. Hazel explains the novel's mysterious author, Peter van Houten, had retreated to Amsterdam following the novel's publication and has not been heard from since.

Weeks later, Augustus reveals to Hazel that he has tracked down van Houten's assistant, Lidewij, and, through her, has managed to start e-mail correspondence with Van Houten. Hazel writes to van Houten with questions regarding the novel's ambiguous ending to which van Houten replies, explaining that he can only answer Hazel in person. Hazel proposes the trip to her mother, but is rejected due to financial and medical constraints. Later, Augustus surprises Hazel with tickets to Amsterdam, attained through a charitable foundation similar to the Make-A-Wish Foundation, namely The Genie Foundation.

Days before the trip, Hazel suffers an episode of pleural effusion and is sent to the ICU, prompting her doctors to question the safety of overseas travel. The medical team argues against the trip but eventually complies with Hazel's parents to accommodate her travel. When Hazel and Gus first get to Amsterdam, they go to a restaurant and find out that Van Houten paid for a meal and champagne on their behalf. Augustus then confesses his love for Hazel that night. Hazel and Augustus finally meet van Houten, but are shocked to find that, instead of a prolific genius, he is a mean-spirited drunk. Lidewij confesses to having arranged the meeting on his behalf, angering van Houten, who proceeds to insult Hazel's cancer and refuses to answer any of her questions. The two leave the author in anger and disappointment.

I have not read the book nor the spoiler hence I didn't know the actual storyline. Watching this movie is refreshing, entertaining and of course, with buckets of tears! It's a beautifully written sad love story and the storyline was predictable at some point yet unexpected at others. Really enjoyed it and the message inscribed in me was YOLO which is so so true. Carpe diem folks.