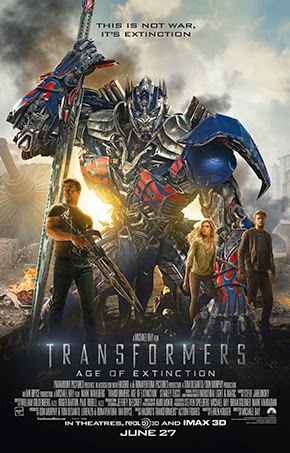 Four years have passed since the final battle between the Autobots and the Decepticons left Chicago in ruins and claimed the lives of over a thousand civilians. The U.S. government has severed its ties with the Autobots and branded them as fugitives. An elite CIA division called "Cemetery Wind" is formed by Harold Attinger with the intent of hunting down and exterminating the surviving Autobots with the aid of Lockdown, a Transformer bounty hunter. Meanwhile, using data obtained from destroyed Transformers, business tycoon Joshua Joyce and his technology firm Kinetic Sciences Institute (KSI) have discovered "Transformium", the molecularly unstable metal that is the lifeblood of Transformers. Joshua's prized creation is Galvatron, a Transformer created from the data inside Megatron's severed head.

In rural Texas, struggling robotics inventor Cade Yeager and his friend Lucas Flannery purchase an old semi-truck in hopes of stripping it down and selling the parts to get Cade's daughter Tessa into college. Cade discovers that the truck is an injured Optimus Prime, and it is not long before Lockdown and Attinger's operatives led by James Savoy storm into the Yeagers' farm and threaten them. Optimus comes out of hiding to fend off against the operatives while Cade, Tessa, and Lucas are rescued by Shane Dyson, an Irish rally racer who is also Tessa's boyfriend. They lose the operatives in a lengthy chase in Paris, Texas, but Lucas is killed by Lockdown's grenade during their escape. Using a drone he took during the raid, Cade discovers that the operatives and KSI are working together. Optimus rallies the remaining Autobots - Bumblebee, Hound, Drift, and Crosshairs - and travel with their new human allies to infiltrate KSI's headquarters in Chicago. There, Cade, Shane, and Bumblebee discover the firm's reverse engineering of Transformer technology. Upon discovering that Ratchet has been slain and his head is being melted down, Optimus and the Autobots storm into the headquarters to destroy the laboratory, but Joshua convinces them that their actions are futile. As the Autobots leave the premises, Joshua launches KSI's prototype Transformers Galvatron and Stinger. Optimus and Galvatron engage in a grueling battle where Optimus realizes that Galvatron is Megatron in a new body. Suddenly, Optimus is blasted from behind by Lockdown, and in the midst of the chaos, he and Tessa are captured into Lockdown's ship. Aboard the ship, Lockdown explains to Optimus that the Transformers were created by a mysterious alien race known as the "Creators", which hired him to capture the Autobot leader. As a reward for Optimus' capture, Attinger's operatives are given the "Seed", a powerful bomb that turns a city-wide area of land into Transformium. Cade, Shane and the Autobots storm into the ship to rescue Optimus and Tessa; while Bumblebee, Crosshairs and the humans escape and crash into Downtown Chicago, the other Autobots detach the rear section of the ship before it leaves into space. Joshua and his business partners Su Yueming, and Darcy Tyril retreat to Beijing with the Seed; the Autobots and their human allies follow them to prevent them from detonating the Seed.
The above taken from Wikipedia.

Thank goodness they changed the main casts, was slowly getting bored of Sam and hot chick, but there is a gap for me. When Autobots became the enemy, where is Sam to help them out? 4 years is not a long time... I mean Sam would still be alive to help the Autobots right? If he can't, perhaps a transition to close the gap. Instead of jumping straight to Cade. Maybe it's just me preferring a perfect blend and flow of the storyline. Anyway, the overall movie was good and you don't need to watch the first 3 to watch this. The actions and CGIs were awesome overload, Michael Bay's speciality there. Knowing the humans nowadays, they would have preferred more actions and less talk/ storyline. So the gap is not visible for them except for me, I guess.

Anyway, a little bitching about the human's cinema etiquettes nowadays... they totally suck! I totally wished I had the money to just buy the other 2 seats next to me (our row had 4 seats only) and leave it vacant. Honestly the couple sitting there kept talking, eating smelly food (definitely not from the cinema) and noisy (kept pulling plastic bags in and out)! Really!! These 'over-educated' humans really are damn selfish and brainless! Nearly spoilt my movie experience here... jeez! Nevertheless, do watch this movie in the cinema, it's worthwhile.