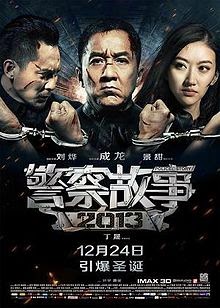 Detective Zhong Wen heads to Wu Bar in search of his estranged daughter, Miao Miao, who is now the girlfriend of the nightclub's owner, Wu Jiang. However, Zhong disapproves of Miao's relationship, which leads to an argument between the father and daughter. Before Zhong can make amends with Miao, he is struck in the head by an unnamed assailant, in a plot orchestrated by Wu.

Regaining consciousness, Zhong finds himself strapped onto a chair, and his hands bound by metal wires. He deduces that Wu was after him all along, but cannot conclude why. Zhong also learns that the other bar patrons, including his daughter, are being held captive. Wu phones the local Lieutenant and demands a hefty ransom as well as an audience with prisoner Wei Xiaofu, before leaving the room Zhong is trapped in.

Zhong breaks free of the wires and escapes from the room. Scouring the bar undetected, he finds the secret chamber of Wu, which is predominantly filled with posters of a teenage girl and a younger Wu, who once went by the moniker "Spider" when he was a kick boxer. He also spots blueprints of the bar and discerns that Wu intends to bomb the entire bar should his kidnapping ploy fail. Through Miao, Zhong obtains a handphone, which he uses to contact the lieutenant. Unfortunately, Wu soon discovers that Zhong has fled the hostage room. Wu grabs Miao at gunpoint, forcing Zhong to reveal his hiding place.

A totally different take from previous police stories movie and I like it. The nitty-gritty dark side of the story says it all... with the momentum slowly building up with the famous Jackie Chan fight but in a cage instead of the funny, slapstick kind from his previous stunts. Dead serious and touching, really enjoyed the movie till the end. I watched the Cantonese version since I don't understand Mandarin but the voice-over was seamless so it was really good. Jackie Chan always lived up to his standard with good, memorable and meaningful movies. He still do his own stunts even at his age! Hats off to him!