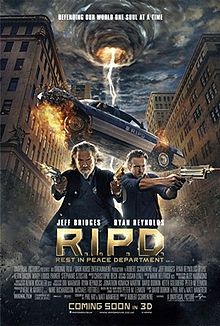 Boston Police Department Detectives Nick Walker and Bobby Hayes stole a chest full of gold found during a drug bust, and Nick buries his share of the gold in his backyard, intending to use it to create a better life for himself and his wife, Julia. However, he regrets his decision and informs Hayes he intends to return the gold. Later, during a raid on a warehouse, Nick and Hayes get into a shootout with criminals, and Hayes kills Nick to prevent him from returning the gold, framing one of the criminals for the murder.

While ascending through a tunnel in the sky to the afterlife, Nick is pulled into the office of Mildred Proctor, director of the Boston division of the Rest In Peace Department (R.I.P.D.), an agency that recruits deceased police officers to patrol the afterlife and capture "Deados", spirits that failed to cross over and return to Earth as monstrous ghosts. Nick agrees to join the R.I.P.D. after Proctor explains that it would stave off a potentially negative final judgment for at least a century, and meets his new partner, Roy Pulsipher, an ex-U.S. Marshal who lived in the 1800s.

Nick and Roy return to Earth to attend Nick's funeral, where Nick learns R.I.P.D. officers are assigned avatars, which is how humans perceive them. Nick's is an elderly Chinese man, Jerry Chen and Roy's is an attractive Russian woman, Opal Pavlenko. After failing to communicate with Julia, Nick accompanies Roy to the apartment of a suspect, Stanley Nawlicki, who tries to escape and is killed by the duo. Pieces of gold identical to the ones Nick stole are found in Nawlicki's possessions and logged into evidence.

At times, exciting and at times, a little dull but overall, it was kinda entertaining. Interesting plot although it reminded me of Men In Black but with a twist. Good for a funny bone movie night.