MPOV: A Prisoner of Birth 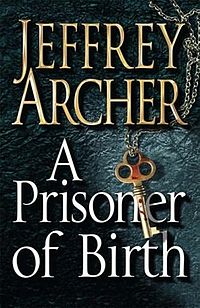 After proposing to his childhood sweetheart Beth Wilson, Danny Cartwright takes her brother Bernie and her to celebrate at a nearby pub. In the pub, they are accosted by four people. Danny, Beth and Bernie attempt to leave the pub without getting involved in a fracas, but Spencer Craig, one of the four that confronted them, follows them out of the pub along with his friends.
A fight breaks out; Bernie is stabbed and dies. Danny is blamed for his murder in a well-orchestrated plot by Spencer and his friends: a popular actor, an aristocrat, and a young estate agent. Danny is arrested and convicted. Sentenced to 22 years in Belmarsh prison, the highest security jail in South-east London, United Kingdom, he encounters two prisoners, Albert Crann, known as "Big Al," and Sir Nicholas Moncrieff. Meanwhile, outside the prison, Beth is pregnant with Danny's daughter.
Sir Nicholas slowly teaches Danny to read and to write. Their friendship grows closer, and Danny decides to dress like his friend in the hope that it will help his upcoming appeal. Danny begins to gather evidence for his appeal with the help of a young lawyer, Alex Redmayne, but unable to present the new evidence, Danny's appeal is denied, and he must serve his complete sentence in Belmarsh prison.
The above taken from Wikipedia.

It started a little slow but peaked when the courtroom battle started. Also the way Danny planned, masterminded the revenge was cool! Really enjoyed the plots and how everything fell into place in the end. Well executed, one of Jeffrey's best novel!