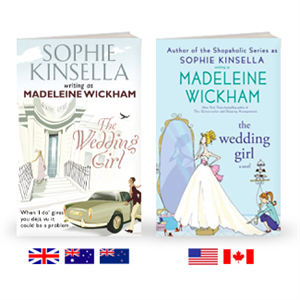 At the age of eighteen, in that first golden Oxford summer, Milly was up for anything. Rupert and his American lover Allan were all part of her new, exciting life, and when Rupert suggested to her that she and Allan should get married, just so that Allan could stay in the country, Milly didn’t hesitate, and to make it seem real she dressed up in cheap wedding finery and posed on the steps of the registry office for photographs.

Ten years later, Milly is a very different person. Engaged to Simon - who is wealthy, serious, and believes her to be perfect - she is facing the biggest and most elaborate wedding imaginable. Her mother has it planned to the finest detail, from the massive marquee to the sculpted ice swans filled with oysters. Her dreadful secret is locked away so securely she has almost persuaded herself that it doesn’t exist - until, with only four days to go, her past catches up with her. Suddenly, her carefully constructed world is about to crash in ruins around her. How can she tell Simon she’s already married? How can she tell her mother? But as the crisis develops, more secrets are revealed than Milly could possibly have realised...

The above taken from http://www.sophiekinsella.co.uk/books/madeleine-wickham/the-wedding-girl/

Light-hearted with a zest of comedy. Totally enjoyed this light read, especially since it’s funny and uniquely Madeleine.