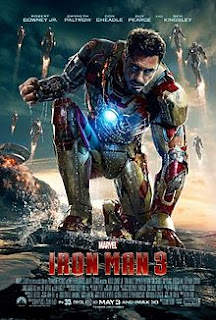 Tony started this movie with a flashback to 1999, New Year's eve before the Millennium, where he had met Maya and Aldrich. Moving forward to the current time, he still has sleeping disorder and Pepper still runs Stark Industries. However Happy is now the Head of Security. One day, Aldrich Killian came looking for Pepper, hoping to collaborate for his new Scientific idea which Pepper turned down citing military weapon. Upon returning home, they had a fight with Tony admitting his problems and Pepper reluctantly cajol him.

Slowly but surely, The Mandarin was transmitting threats directly to the President but to no avail. Tony was leaving the court one day feeling angry and was pushed by a reporter to threaten The Mandarin through live TV. The Mandarin didn't take it lightly and attacked Tony's home instead, causing all hell breaks loose!

I felt like I've waited for ages for this movie! Tony Stark/ Iron Man is my all time favourite super hero and idol so I was so happy when hubby surprised me with the 2D movie tickets for last Thursday movie night ♥♥
♥

Anyway, the movie was totally worthwhile with unexpected storyline. It was intense, enthralling and kept me on my toes throughout the movie! The actions were superb with great and realistic CGI's. Also interestingly, the man makes the suit and not the other way around ya! Just loved the pairing of Robert Downey Jr and Gwyneth Paltrow... fantastic chemistry! Do note that there is a special ending post credits so make sure you stay through the credits... it is way, way towards the end.