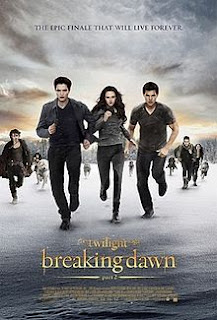 Bella awakens from her transformation from human to vampire, not only keenly aware of her new abilities, but also of changes within the coven asJacob has imprinted on her child, Renesmee. It also appears that Bella's father, Charlie, has been attempting to contact the Cullens for updates on Bella's illness. They intend to tell him she didn't survive, which requires that they move out of Forks, Washington to protect their identities. Jacob, desperate not to lose Renesmee, tells Charlie that his daughter is in fact alive and well, and explains that Bella has had to change in order to survive. He morphs into a wolf, revealing his tribe's shape-shifting power, but does not tell Charlie about vampires, stating that Bella just had to change into something "other".


Several months pass uneventfully, with Carlisle monitoring Renesmee's rapid growth with Bella, Edward, Jacob and the rest of the Cullen family worrying what will become of her with such a rapid growth rate. On an outing in the woods, a bitter Irina sees Renesmee from a distance, and believes her to be an immortal child. Immortal children were those who were frozen in childhood, and because they could not be trained nor restrained, they destroyed entire villages. They were eventually executed, as were the parents who created them, and the creation of such children outlawed. Irina goes to the Volturi to report what she has seen to them.
Alice sees the Volturi and Irina coming to kill the Cullens, and leaves with Jasper the next day, instructing the others to gather as many witnesses as they can that can testify that Renesmee is not an immortal. They must gather the witnesses before the snow covers the ground, because that is when the Volturi will come. The Cullens begin to summon witnesses, such as the Denali family. One of the Denali, Eleazar, later encounters that Bella has a special ability: a powerful mental shield, which she can extend to protect others from mental attacks like those from Jane and Alec, with practice.
The above taken from Wikipedia.
Finally watched this highly over-rated movie! IT IS OVER-RATED! It was a little dull at some point, both Robert and Kirsten's acting were so, so, so..... dull and bland. The fighting scenes felt cartoonish and unrealistic although it finally added a little oomph and zest into the movie. The only plus point was that Mackenzie Foy, who played Renesmee, was really pretty. Thank goodness I didn't waste my $ watching it in the cinema.
Rating: 5/10
Email ThisBlogThis!Share to TwitterShare to FacebookShare to Pinterest
Sections: Movies