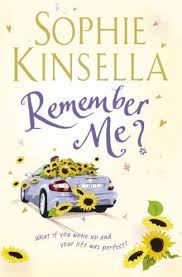 Remember Me? is a successful 2008 novel by the author Madeleine Wickham under the pseudonym Sophie Kinsella.

It is about Lexi Smart, a woman who has insecurities about herself until she experiences amnesia after a car accident. When she wakes up in the hospital she finds that she is a completely different person:she still thinks it’s 2004 and she’s a twenty-five-year old with crooked teeth and a disastrous love life. The most previous events of her life she can remember are three years in the past! She learns it’s actually 2007 – she’s twenty-eight and she’s the boss of her department. In the meantime she married a handsome millionaire, lost some weight and other unattractive features, at the same time losing all of her friends due to her changed attitude after the death of her father. As the story unfurls she realises that she doesn't particularly like the person she's supposed to be, all the same trying to find her footing. As she learns more about her new self, she realises her life is not all that she thought it would be. This is complicated further when she finds out that her perfect marriage may be an illusion as well, when a man turns up in her life, claiming to be someone she's been having an affair with. How on earth did all this happen? Will she ever remember? And what will happen when she does?

Honestly, a good read from Sophie Kinsella. Totally loved her witty imaginations and enjoyed her chick lit characters. It's so heart-warming, especially when Lexi realized the truth... something most of us would have faced but denied in reality, preferring the luxury rather than true love. Respect that she made the right decision in the end ^.^