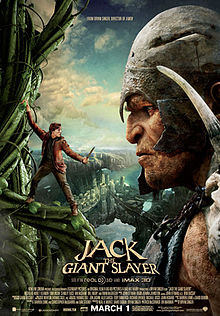 A father was tucking his son to bed. Upon his son's insistence, he read an old fable for him to sleep. On the other side of the kingdom, a mother was reading the same fable to her daughter. Both children are fascinated with the legendary King Erik, who is famous for defeating the giants with a magical crown.

10 years later, the son, Jack, goes to the market to sell his horse so that he can helped support his uncle's farm. He was awed by a puppet show about the legendary King Erik and coincidentally saw, and fell in love, with Princess Isabelle, the daughter. Isabelle was accosted by some rogues and Jack tried to save her. Mid way through, her guards came to the rescue and the rogues let them off. Their paths intertwined again when Isabelle ran away from the palace after a disagreement with her father about her betrothal. It was raining heavily hence she seeks shelter at the nearest house, coincidentally it was Jack's. Earlier on, Jack too had an argument with his uncle as he has traded his horse for some beans instead, leaving his uncle to trudge out and sell whatever he can so that they can save their farm. Unwittingly, their adventure started when one of the beans had fallen and as it was raining, it grew into a giant beanstalk carrying the house and Isabelle into the sky! Jack has accidentally fallen off the ground instead!

An interesting take on this fable, really enjoyed it max! Beautiful animation with beautiful castings. A great movie to enjoy especially with your family. Totally worth the $$!