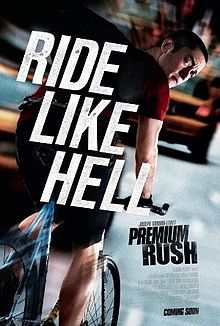 The film is not shown in chronological order, and contains numerous flash-forward and flash-back cuts, indicated with an overlaid digital clock showing the time advancing rapidly forward/backward to the next scene. In chronological order the events are:

Wilee (Joseph Gordon-Levitt) is a New York City bicycle messenger alongside his ex-girlfriend, Vanessa (Dania Ramirez). Her roommate, Nima (Jamie Chung), delivers $50,000 that she has saved for two years to Mr. Leung (Henry O), a Chinese hawaladar, in exchange for a ticket that she must deliver to Sister Chen, buying a place for Nima's son and mother in one of Sister Chen's ships that smuggle people from China to the United States.

Mr. Lin, a local loan shark, learns of the ticket and how whoever returns it to Mr. Leung can collect Nima's money. He then approaches Bobby Monday (Michael Shannon), a gambling-addicted NYPD officer who owes him money, offering to clear Monday's debt if Monday gets him the ticket. Monday begins searching for Nima, who decides to hire Wilee to deliver the envelope with the ticket to Sister Chen at 7 P.M. After Wilee leaves, Nima is confronted by Monday, who coerces her into revealing that Wilee has the ticket and handing over the delivery receipt. After Monday leaves, Vanessa finds Nima, and learns the contents of the envelope.

TBH, I wasn’t thrilled to watch this movie. Since hubby wanted to watch it so I tagged along lor. Can’t do much right? Anyway, it turned out to be a good movie although some parts may not be perfect. I was kept on my toes in most parts! Really interesting plots, never knew cycling can be so exhilarating and exciting before! Worth watching!