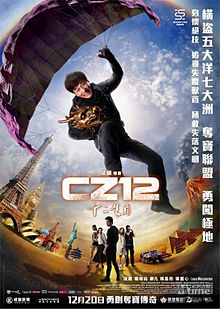 The movie begins by a man telling the story of the Old Summer Palace and how it was looted in the 1800s by the British in the Second opium war. Among the treasures are bronze heads of the 12 Chinese Zodiac animals.

In the present day, the bronze heads are auctioned for over a million euros each. The main company supplying the bronze heads and other stolen relics is MP Corporation. JC (Jackie Chan), is tasked by MP Corp to find the remaining lost bronze heads, with a promise of a 10 times bonus if he can recover all of them. JC visits a man named Professor Guan, who had created 12 identical replicas for study purposes with his team of researchers, under the pretense that he is a reporter named Martin from National Geographic. When left alone, JC scans the multiple bronze Zodiac animal heads using special gloves so that his secret organization can replicate an extremely realistic model of them. After scanning, he goes to Paris to find a woman named Coco, recommended by Professor Guan, for more information on the whereabouts of two bronze heads.

JC, along with his partners Simon (Kwon Sang-woo), David, and Bonnie, infiltrate a mansion to find two of the bronze heads. JC manages to decode the password to a top secret vault and finds two bronze heads, a painting called "The Roses", along with many other valuable national treasures thought to be lost inside. JC's cover was soon busted but managed to evade capture with all the valuables, but is spotted by Coco. Having no time to explain himself, he tells Coco to meet him at a boat house while fleeing from the mansion's security. At the boat house, Martin tells Coco that he is working for a secret corporation that is trying to recover all the lost relics for China. The guards from the mansion storm the boat house and try to attack JC. However, the police are called in and arrest all of them. JC, Coco and Simon are cleared of any wrongdoing and are released.

Honestly, it's typically a Jackie Chan type of movie but also damn funny lor! My Angel's were laughing their hearts out watching this movie! Just don't expect too much except for an action comedy, Jackie's trademark, at the cinema. Worthwhile to watch the last action movie by Jackie, do also stay on until the end as there's a short speech by the man himself ^.^