MPOV: Rise of the Guardians 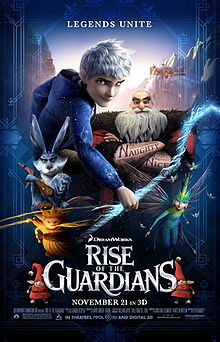 When Jack Frost was saved by the Man in the Moon, he felt elated without realizing he's invisible, thinking that he's been born for a reason. Once he realized his invisibility, he felt hurt, not knowing what to be expected of him by the Man in the Moon. As time flew by, he has been a subject of nuisance, creating havoc wherever he goes.

So when Santa Claus found out that the Bogeyman has returned, he quickly summoned the rest of the Guardians i.e. Tooth fairy, Easter Bunny and Sandman. After a bout of confusion, Sandman realized that Man in the Moon has a message for them. Apparently he has assigned Jack to be the newest member of the Guardian. All the Guardians were disapproving of this but they had no choice and to follow as what Man in the Moon had wanted. After managing to 'kidnap' him to the North Pole, Santa explained to Jack of the Bogeyman's threat and asked his cooperation to help the Guardians out. This cooperation then slowly led to the growing trusts and beliefs of each other and in returned getting Jack in as a Guardian too.

This movie basically revolved around Jack Frost, from the day he was reborn to the day he became a Guardian. A simple and honest movie, great for the family especially for the coming Christmas. Unfortunately, the movie quality was quite bad and at times the sound faded off... not sure if it's due to wear and tear of the film or the cinema itself was not well-maintained *blinks*