A date that changed my life forever. A date I'll remember always, till the day I die. A date that made me realized how selfish I had been, self-absorbed and ignorant.

My dad has always been a healthy, strong and stoic man, lean and tall, albeit the drinking and smoking. I have always thought he will live to a 100. How wrong I was. He has been having pain all over his body, specifically back and bro Chris has brought him to the hospital for a check up. After x-ray, doctor confirmed it's due to arthritis and also bone-growth, both related to aging hence no cure for it but constant healthy diet and exercise should get him by. Dad wasn't happy with the result as he felt it could be otherwise. One of the reasons why he hated going to the doctors as he doesn't believe in them. He was a stubborn man still sticking to his old eating habits (thankfully he has stopped smoking and drinking). Anyhow, he was getting weaker, skinnier and frail but he didn't want to go for a second opinion as he has no faith in our 'blood-sucking' money-minded doctors.

Seeing him so frail totally broke my heart. Knowing how stubborn he was, we can't do anything except to attend to his whims and fancies. Thankfully Tyger and Princess were there to accompany him during his last week. He took them to Carrefour, walked all the way there and back! About an hour to and fro leh! Spending time with them sort of completed part of his wish as he was always fond of them. He grew weaker by day, can't eat and having bout of diarrhea. Out of the blue last Friday, he wanted to drink some beer so I got him 2 cans of Carlsberg (he actually wanted 2 bottles of Tiger but mom heard wrongly =.=)

While on the way to fetch mom last Saturday, mom called asking us to hurry as dad has collapsed in the bathroom. Chris had trouble carrying him and they had called the ambulance. Upon reaching, the ambulance was there and the paramedics were checking him out while trying to carry him up. Seeing dad in such situation, so skinny and frail, gasping for air made it hard for me to accept that he's so weak and old. Finally on the stretcher and in the ambulance, they rushed to UH as he had fainted. Apparently his heart failed once and they managed to revive him, immediately admitted him into ICU. Doctor also told us to be prepared for the worst, he could be around for a day or probably a week. Having said that, we got sis back from Singapore immediately. After some scans and x-rays, doctor concluded that he could be having lung cancer as there was some black mass and white spots on his lung. As it was late, they could only confirm the next day with more tests. We decided to have our one to one before going home for the day. It was definitely the right decision.

Upon reaching home, it still felt surreal, as though I was in a bad dream. Tried sleeping, tossing and turning but to no avail. Kept asking God to allow dad to overcome this obstacle. Worried sick but still trying to think positive, hoping for a miracle. When I finally was about to doze off, flashes of dad's funeral came into mind, causing me to be wide awake. Before I could say 'choi!' my handphone rang, it was mom. My worst fear came true. Dad has passed away at 1.42am. I was stunned, crying uncontrollably. Couldn't accept the reality. It was just too sudden. Hubby kept consoling me, telling me at least he didn't suffer. We had to wake Angels up and headed to the hospital again, this time for a different reason, sigh!

Seeing him that night, looking so serene and in peace. Thankfully we had our closure but I felt I still have more to say. I was kinda angry and thinking why can't I have another day? I know it was enough for him but I was being selfish again. After settling the hospital bills, etc, we went home. Bro Ryan has been entrusted to arrange for the funeral. Since he is a member of SJBA, he has contacts to get all the things done in time. It was not easy but it had to be done.

Once home, it wasn't easy trying to even get some 40 winkers. After a while, I gave up sleeping and did house chores instead. Lots of things running through my mind, all about dad. Some happy moments, some sad, even some regrets. In the end, it felt better after trying to so hard to accept the fact that he has moved on to a greener pasture... somewhere over the rainbow. 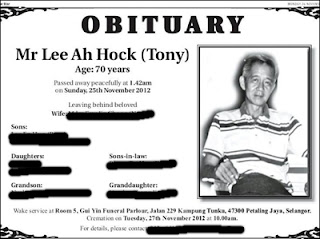 To be continued...
Email ThisBlogThis!Share to TwitterShare to FacebookShare to Pinterest
Sections: Condolences, Family