You might have noticed that there’s no ‘MPOV’ at the title. Well, since this is not a movie review which explains the missing abbreviation. Just some rants of my unlucky endeavor obtaining the free movie tickets since it’s been awhile now that I have not been lucky to score it =.=

I was trying very hard to win some tickets to Skyfall as Hubby is a 007 fanatic. So when I finally score it, I was ecstatic! It was from Maxis:

Damn happy leh to receive this email! Unfortunately it was short-lived as due to some unforeseen circumstances, we found out we were not able to attend when the date was near, sigh! I did email to Maxis and also commented in their Facebook page that I can’t make it and hoping if there are some other alternatives but to no avail. No one replied actually and I can’t transfer it to someone else... so sad =.=


Once bitten, twice shy… they said. Well, a second email did come through but not from Maxis. It was from Sony and it felt like redemption of the first especially since it’s an open ticket! 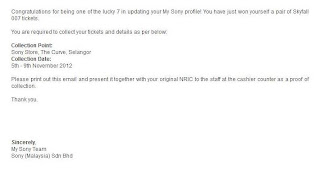 I managed to quickly collect the tickets BUT ….....

Angels are with us now for the long school holidays. So how? We can’t be leaving them behind, watching a movie without them *guilt creeping in*

Luckily, these tickets will not go to waste as it’s not event-oriented… 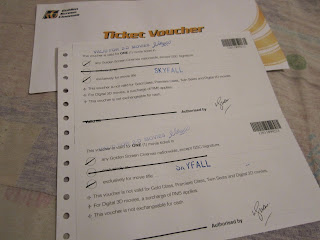 It’s in the good hands of my bro Chris… hope he enjoys the movie! However don't be a spoiler by telling me the ending ya!

Hmm... weird... when I finally got the tickets, somehow something will appear to not allow me to watch it... max sigh!
Anyway, thanks to Maxis for the grand tickets, I'm honoured but we couldn’t make it :-(

Thanks to Sony for this lucky tickets! At least I could give it to my bro and not waste it :-)
Email ThisBlogThis!Share to TwitterShare to FacebookShare to Pinterest
Sections: Thoughts

SO, did u watch it? U have to watch it! I fell in love with Daniel Craig! I think it's the best so far!

Unfortunately not yet lah... can't wait to watch it too as I've read many good reviews about it :-)