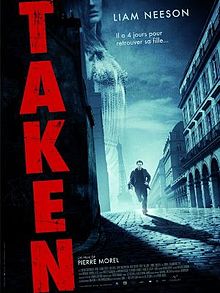 CIA field operative Bryan Mills has retired to try to build a closer relationship with his teenage daughter, Kim, who now lives with her mother, Lenore and her very wealthy stepfather, Stuart. While working security with other former operative friends, Bryan saves pop star Sheerah from a knife-wielding assailant, and out of gratitude, Sheerah agrees to see Kim after hearing that she has aspirations to be a singer. At a lunch soon after, Kim asks Bryan for permission to travel to Paris with a friend, Amanda, but Bryan balks at the danger of two girls traveling alone. He then relents, but at the airport, is dismayed to find out that the pair will actually be following the band U2 during their European tour, something Lenore knew, but kept from him.

Arriving in Paris, Kim and Amanda meet Peter, a strange man who offers to share a cab with them and who invites them to a party. This turns out to be a ruse so that Peter can find out about them and where they are staying. While on the phone with Bryan back in America, Kim sees Amanda being kidnapped by a group of intruders. Kim is taken shortly afterward, while Bryan records the incident. When a kidnapper picks up the phone, Bryan tries to bargain with him, but is unsuccessful.

Bryan is informed by a former CIA colleague that, based on the recording, Kim has probably been taken by an Albanian human trafficking ring, and that, according to statistics, if Kim is not rescued within four days, she would likely never be found. Bryan travels to Paris on one of Stuart’s private jets and finds Peter at the airport. After a confrontation and chase, Peter is hit and killed by a passing truck before Bryan can interrogate him.

A good movie to watch especially with our sisters and daughters, to remind us of the evil truth out there where girls were kidnapped to be whores and slaves to the whims and fancies of the rich and famous. It felt so real, got me more worried for my children geez! Liam Neeson may be old but he is the right actor for this role. The storyline is somewhat predictable and rushed a little but overall the momentum to find his daughter was daunting and nail-biting! Can't wait to watch Taken 2!