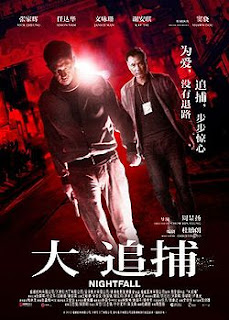 When a Hong Kong celebrity is found brutally murdered, his body floating in the middle of the ocean, hardheaded detective Lam is called in to take charge of the investigation. As Lam zeroes in on a killer from the past, the murder appears to be a straightforward case of revenge. But the more that Lam pursues his suspect, the deeper he falls into a web of lies. To find the truth, Lam must dig into a 20 year-old case for answers, the one link tying the suspect to the celebrity. But in doing so, Lam will uncover a dark secret so shocking; it will turn the investigation upside down. Who is the victim and who is the killer? Just as Lam believes he has everything figured out, he will discover that there’s a fine line between love and hate.

The above taken from http://asianwiki.com/Nightfall_(HK_Movie)

As most of you may know I don't really watch Chinese movies, let alone those acted by Simon Yam nor Nick Cheung. No offense but most of their movies were either gangster gory or too dramatic. Thankfully, this movie is different, with a class of it's own. It was an interesting take as I thought it was a horror movie initially due to it’s creepiness. The eerie feel and sound made the movie different, storyline was not as it seemed until towards the middle when the truth prevailed. Slowly but surely I was rooting for the real father, it's so sad he has been deprived of fatherhood. The way he has sacrificed for her in the end was really touché. Totally an extraordinary father to say the least, Nick Cheung portrayed it well. Honestly, a good action drama movie to watch.