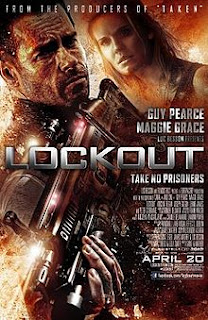 In 2079, CIA agent Snow (Guy Pearce) is arrested for the murder of undercover agent Frank Armstrong who had uncovered evidence of an agent selling state secrets about the space program. Secret Service director Scott Langral (Peter Stormare) threatens to have Snow incarcerated on the maximum security space penitentiary MS One where prisoners are kept in stasis for their sentence. Snow's agent friend Harry Shaw (Lennie James) tries to locate Snow's contact Mace who knows where Frank's briefcase containing the secret information is hidden. Meanwhile, Emilie Warnock, (Maggie Grace) daughter of US President Warnock, arrives at MS One to investigate claims that stasis might affect prisoners' minds, leading to psychopathy and dementia. Hydell, a prisoner, is awakened for questioning, but manages to escape. He releases all of the prisoners and starts a riot, led by his brother Alex. Emilie and others are captured. Shaw convinces Langral to send Snow to rescue Emilie rather than risk her life in a siege. Snow is initially reluctant, but agrees after Shaw tells him that Mace is on MS One, and could help Snow prove his innocence. Snow secretly infiltrates MS One. Alex realizes Emilie is the President's daughter and goes to secure her. Emilie manages to escape with her bodyguard Hock and hide in a secure room. A problem with the oxygen supply however causes Hock to commit suicide to give Emilie more time.
Snow breaks into the room and rescues Emilie. Snow changes Emilie's hair to conceal her gender and appearance after the prison is alerted to her true identity, allowing them to walk through the prison population. They find Mace, but the stasis has given him dementia and made him incoherent. Snow and Emilie bring Mace with them as they attempt to reach the escape pod. Without the maintenance of the staff, the prison has begun to fall out of its orbit and crashes into the International Space Station. The collision causes a breach and Mace is killed. Snow brings Emilie to the pod but discovers it has only one seat, and that he has been sent there to die. He sends Emilie on her way, but she allows the pod to launch without her, believing that the remaining hostages will be otherwise killed. Hydell contacts Emilie and threatens the hostages unless she reveals her location. When she does so, he kills all of the hostages.

I won't comment much. In short, it was gory, storyline was ordinary, predictable and lame. Luckily didn't watch this in the cinema. A movie to watch when you have nothing else to watch, to pass time with.