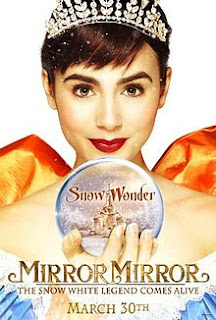 The film opens with Queen Clementianna (Julia Roberts) narrating the tale which she says is actually her story, not Snow White's. Snow White's mother died after giving birth to her. Her father, the King (Sean Bean), then raised Snow White so that she could rule the kingdom one day. Feeling that she needed a mother, the king married again. His new wife is Clementianna, the most beautiful woman in the land. One day, the king leaves to fight a great evil that has invaded the land, leaving Snow White his favorite dagger. He rides off into the forest and never comes back. Clementianna rules in his place. Jealous and threatened by Snow White and the people's devotion to her, the queen decides Snow White must do what snow does best, fall. Ten years later Snow White (Lily Collins) is turning eighteen and has spent much of her life sequestered in the palace. The Queen does not care for her but Snow White is still loved by the palace staff. Snow White has accepted her fate and the abuse of her overbearing stepmother, forgetting that she is the true heir to the throne. The Baker tells Snow White that the kingdom is rightfully hers and that she should go outside and see what has become of her people. Snow White then defies the Queen's orders and leaves the palace, intent on seeing the conditions of her kingdom. In the forest, she meets Prince Andrew Alcott (Armie Hammer) and his companion, Renbock who have been robbed by bandits (the seven dwarfs). She and the Prince are drawn to each other but go their separate ways. Snow White arrives in the town which the palace overlooks, and discovers it is barren and the people are destitute due to the Queen's greed. She remembers visiting the town once before with her father, and how the people used to sing and dance. A townswoman tells her that such things have not happened for many years. Angered that Clementianna has destroyed everything her father worked for, Snow White decides to help the kingdom and overthrow the Queen.
Prince Alcott finds his way to the palace. The Queen, realizing he comes from a wealthy kingdom, hatches a plot to get him to marry her so she can solve her financial problems. She hosts a ball in honor of the Prince and goes to great lengths to make herself as beautiful as possible. Snow White secretly attends the ball, planning to ask the prince, whom she believes she has not met, to help her restore the kingdom. She and Alcott learn the truth about each other when they are partnered in a dance. Smitten, Prince Alcott makes sure that Snow White stays by his side which the Queen notices. The Queen has Snow White seized by her guards, and Snow White, for the first time in her life, stands up to her stepmother and tells her she has no right to rule as she does. The Queen, seeing Snow White as the threat she always feared she would be orders her manservant, Brighton (Nathan Lane), to take the princess into the forest and feed her to the Beast that lives there. Brighton takes Snow White to the forest but is unable to kill her, instead he releases her and tells her to run. Snow White flees the Beast (Frank Welker) and collapses at the door to the Seven Dwarfs house. The Queen goes to her magic mirror, a portal to a bleak and barren world that contains a house full of mirrors. Within the mirrors lives a reflection of the Queen. The reflection is a younger, wiser version of her (Lisa Roberts Gillan), dressed in simple country clothes, suggesting the Queen had truly humble beginnings. The Queen then requests a love potion so she can make the Prince fall in love with her. The mirror repeatedly warns her that there is a price for using magic. Back in the forest, Snow White wakes up to find herself surrounded by the dwarfs Grimm, Butcher, Wolf, Napoleon, Half Pint, Grub, and Chuckles. After much debate they agree to let her stay with them for one night.

An interesting take on the famous Snow White tale but it has been revamped too much with an unwarranted twist that made the movie somewhat stumped. It's like a fairy tale with a dark side, futuristic and odd. The way the movie was made seemed aloof, the fighting scene seemed fake especially when Snow was fighting her prince and the ending made no sense! I mean it doesn't jive! Totally surprised that Julia Roberts was even in this movie! The only consolation to this movie is the lavish, beautiful outfits or costumes which were over the moon!