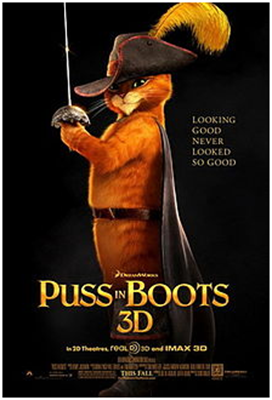 Years before Puss (Antonio Banderas) meets Shrek and Donkey in Shrek 2, he goes on a heroic adventure teaming up with mastermind Humpty Dumpty and street-savvy Kitty Softpaws. He learns that the outlaw couple, Jack (Billy Bob Thornton) and Jill (Amy Sedaris), have the magic beans he's been looking for most of his life, beans that can lead him to a giant's castle holding valuable golden goose eggs. When Puss tries to steal them from the outlaws' room, a masked cat (Salma Hayek) interrupts. Both fail and escape, and Puss follows the cat back to the Glitter Box, a club, where they have a dance-off and a sword fight, ending when Puss hits the masked cat in the head with a guitar. He learns that the masked cat is Kitty Softpaws, and is shocked to learn she is a girl. She is allied with Humpty Alexander Dumpty (Zach Galifianakis), a talking egg and Puss' long-estranged childhood friend from the orphanage where he was raised. Puss tells Kitty of his feelings of betrayal for a youthful misadventure when Humpty tricked Puss into helping commit a crime. Humpty attempts to convince Puss to join them in finding the beans and retrieving the golden eggs, which he does.

A self-absorbed, self-indulgent kinda movie. The whole movie with Puss narrating and talking, was so damn boring! I actually fell asleep watching an animated movie =.= The fighting scenes didn’t do much justice as it was over-shadowed by Puss character. Thankfully Kitty sort of saved the movie a little. She reminded me of Catwoman ^.^