MPOV: The Adventures of Tintin: The Secret of the Unicorn 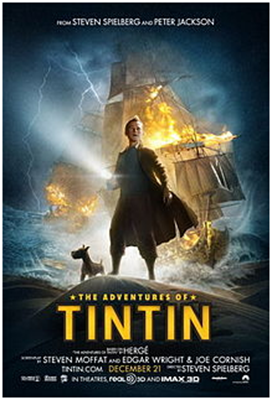 Tintin, a young journalist, and his dog Snowy are browsing in an outdoor market in a European town (scene starts off with a cameo of Hergé doing Tintin's portrait). Tintin buys a model of a three-masted sailing ship, the Unicorn, on the cheap, but is then immediately accosted by the sinister Ivan Ivanovitch Sakharine, and the mysterious figure of Barnaby, who both try to buy the model from Tintin, without success. Tintin takes the ship home, but it is broken during a fight between Snowy and a neighbour's cat. As it breaks, a parchment scroll slips out of the ship's mast. Snowy spots it but is unable to alert Tintin. Meanwhile, incompetent detectives Thomson and Thompson are on the trail of a pickpocket, Aristides Silk. Tintin visits Sakharine in Marlinspike Hall where he learns that there are at least two model ships.

A splendid take from Steven Spielberg! The whole movie felt exciting, including the background music! However I find Tintin to be annoying at times as he’s so damn talkative! LOL! I have not read his comic before so not sure if that is 1 of his characteristics. Anyway, overall entertaining and enjoyable… totally love Snowy! So adorable ^.^