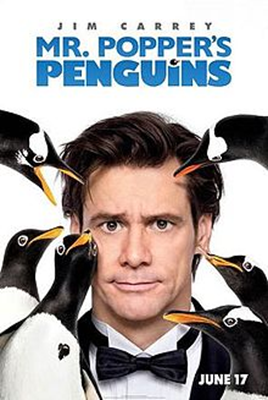 Thomas "Dylan" Popper Jr. (Jim Carrey) is a divorced realtor whose father traveled to many far places around the world during his childhood. When his father dies, a crate containing a gentoo penguin (Captain) shows up at his doorstep. Eventually, due to a miscommunication, more penguins arrive (Bitey, Stinky, Lovey, Nimrod, and Loudey), bringing the total to six. Popper initially intends to donate the penguins to a local zoo, but changes his mind when his children, Janie Popper (Madeline Carroll) and Billy Popper (Maxwell Perry Cotton), fall in love with the birds.

At the same time, Popper is given the task of buying Tavern on the Green, an old restaurant where he used to eat with his father as a child, with the intent of tearing it down and building a new development in its place. However, its elderly owner, Selma Van Gundy (Angela Lansbury), will only sell it to someone who she deems a person of true value. Having the penguins around helps Popper to become closer to his children and he begins dating their mother, Amanda Popper (Carla Gugino), again. The penguins eventually lay three eggs. Two of the eggs hatched and one doesn’t. Popper becomes obsessed with saving the last egg, losing his job in the process.

Upon realizing that the egg can’t be saved, Popper feels he is not capable of raising the penguins and donates them to the zoo. He then refocuses his attention on purchasing the Tavern on the Green. His children and ex-wife, however, are disappointed in his decision, seeing it as wrong. Popper then finds a lost letter from his father which had been delivered with the first penguin, Captain.

The penguins were damn cute!!! So adorable and full of characters!!! If those penguins were real, I think it would have cost a fortune to maintain; the zoo would be a better place compared to the house. Anyway, it was truly an amazing movie, loved the characters instilled in it albeit the usual divorced parents became intertwined again storyline. Entertaining with some sentimental moments and Jim Carrey overplaying his character at some point.