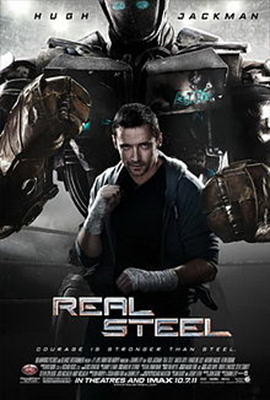 Charlie Kenton’s robot, Ambush, was supposed to fight another robot at a fair when he realized the opponent was a bull instead! Feeling confident, he made a $20k bet with the organizer, Ricky, but instead lost the fight due to his over-confidence and cocky attitude. Before he could made a dash as he doesn’t have the money to pay Ricky, he learnt that his ex-girlfriend has passed away, leaving behind their only son. He had to quickly head for the court hearing to determine his son’s fate. As Charlie has not met his son, Max, he was determined to give up his custody to Max’s aunt Debra. Upon reaching the courthouse, Charlie noticed Debra’s husband was rich and he seized the moment to make an outside deal with him i.e. $100k in exchange for the custody. However there’s a condition where Charlie has to take care of Max while they vacation for the next 3 months with $50k upfront and the balance to be paid once he hands over Max after their vacation. Once father met son, it is the beginning of a beautiful relationship.

We finally watched this movie after hearing and reading many rave reviews. Unfortunately, there was 2D version only so we tried it. I can’t see the difference though. Perhaps I was just too tired so didn’t noticed the clarity of the movie but I was also too engrossed watching it! It was a really good movie overall! Worth every penny watching it in the cinema! Hugh Jackman looked smaller, slimmer as compared to Wolverine but looking good too. Evangeline Lilly was a good choice as Bailey Tallet (reminds me of my favourite drink!) Dakota Goyo is new, I guess, as I have never heard of him but boy, he can really act! The similarity and nostalgic experiences between father and son were so drastically obvious, which made the movie even more appealing. A simple, traditional storyline with a modern twist of steels. Totally loved the CGI and ‘oh so real’ robots especially Atom *happy sigh!*