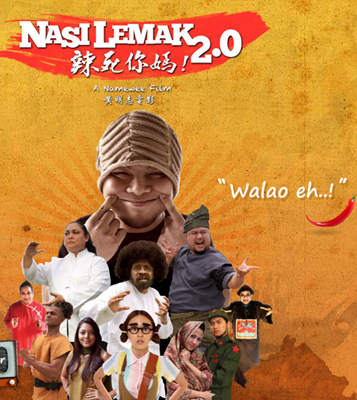 A young chef, Huang Da Xia (played by Namewee) struggles to get his restaurant business going. The reason his restaurants rarely gets customers is because he cannot adapt to the "localized" cooking his patrons are looking for. However, contradicting his unpopular cuisine, he is also well-known as "Hero Huang" in the local neighborhood where he carries out good deeds in helping the community (e.g: Filming videos and putting them on his Youtube account.) until he met Xiao K (played by Karen Kong) who asked for his help. Xiao K's father, owner of a famous chinese restaurant, is fighting with her aunt for the ownership of the restaurant. After some complicated discussions, they decided to hold a contest to see who can cook the best chinese dish. Desperate to get his life and the restaurant business back on track, Chef Huang decided to help Xiao K. Huang seeks help from a mysterious hawker stall lady (played by Adibah Noor), who summons him to embark on an extraordinary journey of his life. During this self-enlightening experience, he will also meet many "local heroes" each lending their support to help him re-discover his roots and the real hidden message of "Nasi Lemak".

I am not a fan of Namewee. Hence when the movie was out, I was not all hyped up like some of my friends were. Look at him… famous for all the wrong reasons o.O Anyway, Hubby is a fan so I just watched along, like any other good wife does ^.^ Ok ok, I was curious… especially since it has gotten some good reviews and also wanted to know which scene sort of triggered the death of one of the actors… curiosity killed the cat mah!

Overall, the storyline has a similar approach like many local movies i.e. moral of the story. The difference would be the many hidden messages in the movie. You will get the drift as you watched along. He also wanted to be different, incorporating all the different culture and religion into the movie which was a breath of fresh air and also funny at some point. It really took 1 Malaysia up to a different level. I especially loved Arumugam… very funny chap ^.* The only thing that annoyed me was the repeated term ‘walao eh’ =.=