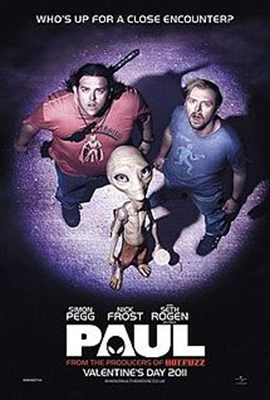 Graeme Willy and Clive Gollings (Simon Pegg and Nick Frost) are two English comic book nerds and best friends who have travelled to The United States to attend the annual San Diego Comic-Con International and to take a road trip in their recreational vehicle (RV) to visit all the sites of major extra-terrestrial importance. At night along the highway they investigate a crashed car and they meet and discover an alien named Paul (voiced by Seth Rogen) who is in desperate need of their help. Although shocked by the appearance of Paul, Graeme agrees to give Paul a ride, but Clive is not happy about the idea. Later, Lorenzo Zoil (Jason Bateman), a shady government agent, arrives at the site of the crashed car and informs his mysterious female superior over the radio that he's closing in on Paul, and she recommends using local law enforcement as back-up. Zoil then recruits two inept FBI agents, Haggard (Bill Hader) and O'Reilly (Joe Lo Truglio), to aid in his mission, without telling them the nature of their target.

Graeme, Clive and Paul pull into a motor park run by Ruth Buggs (Kristen Wiig), a Christian fundamentalist, and her controlling father, Moses (John Carroll Lynch). The trio bond around their camp grill and Paul reveals that since he was captured by the government, he had been advising them in all manner of scientific and sociological achievements. Yet Paul had outlived his usefulness as a receptacle of knowledge, and his captors were intending to surgically remove Paul's brain in an attempt to harness his abilities. With help from a friend inside Area 51, Paul sent an S.O.S. to his home planet, and he was escaping to meet up with them. The next morning, Paul inadvertently reveals himself to Ruth, and the trio are forced to kidnap her and make a hasty escape. Paul then shatters Ruth's faith by sharing his knowledge of the universe via telepathic link; at first horrified, Ruth suddenly becomes eager to sin, which her father had raised her to fear doing. She initially doesn't trust Paul, but he heals her eye, as she has been blind in it since the age of four.

I never thought I would say this… I did enjoyed watching this movie o.O It was hilarious and dumb-witted! The domesticated alien which is Paul was entertaining albeit being rude and loud-mouth! This movie is definitely not for the young ones ya… I think it’s rated as 18SX. A sci-fi flick with a twist!