Finally! Got tickets to watch Kung Fu Panda 2 last Saturday! Angels were ecstatic but the seats suck… it was the 4th row from the front leh =.= 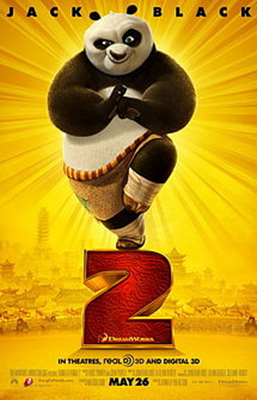 It started with a snippet from the past, excerpt from Wikipedia:
Long ago, Lord Shen, heir of the peacock clan that ruled Gongmen City in China, sought to harness the power of fireworks as a weapon with which to rule the entire country. When he learned from the court's goat soothsayer (Michelle Yeoh) that "a warrior of black and white" would one day defeat him, Shen assumed she was referring to the giant pandas and had them exterminated to avert the prophecy. Shen's parents were horrified at this atrocity and exiled Shen, who swore revenge.
Many years later, Po is living his dream as the Dragon Warrior, protecting the Valley of Peace alongside his friends and fellow kung fu masters, the Furious Five, but is told by Master Shifu that their masters have gone missing and fears Lord Shen is responsible. While fighting off a pack of wolf bandits who have been stealing refined metal for Lord Shen, Po is distracted by a symbol on the head wolf's armor, which causes Po to have a flashback of his mother and allows the wolves to escape. Po asks his goose father, Mr. Ping, where he came from, but all Ping can tell him is that he found Po as an infant in a radish crate and adopted him.
I have not watched Kung Fu Panda before so I do not know how the first one fared nor how did Po became the Dragon Warrior. I was not left in the dark though… the story continued effortlessly, without having to know much of the first one. Thankfully, this 2nd instalment was hilarious and entertaining… Tyger laughed so loud! Storyline was as good with interesting kung fu moves. Of course, not forgetting the educational moral values which I doubt anyone would have realized or remembered. The one thing that touched a chord in me was when Po mastering the inner peace of mind and Tai Chi the droplet of water which seemed effortless and beautiful… *dreamy sigh*! Anyway, looking at the ending, part 3 is definitely on the way…
7 thumbs up out of 10
Email ThisBlogThis!Share to TwitterShare to FacebookShare to Pinterest
Sections: Movies