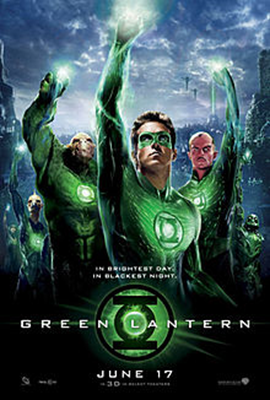 Millions of years before the Earth was formed, a group of beings called the Guardians of the Universe used the essence of Willpower to create a universe police force called the Green Lantern Corps. They split the universe into 3,600 sectors, one green lantern per sector. The strongest of all the lanterns was Abin Sur of sector 2814, he defeated the ultimate being of fear called Parallax in the Lost Sector (Sector 666).


The Story begins when a spaceship crashes in the Lost Sector and Parallax uses their fear to break free of his prison. Six months later, Abin Sur is contacted by Sinestro who tells him that Parallax has killed 4 green lanterns and two planets. Parallax immediately attacks and mortally wounds Abin Sur, who escapes on a ship to Earth.


I have wanted to watch this movie since the release of the trailer and mind you, no regrets! In fact, I have been jesting with my friends of the tagline 'The ring chose you' ^.^

Although adapted from DC Comics, the storyline has been changed to suit the movie theme which was fantastic with the right amount of everything. I find it entertaining, the fighting scenes... the cool CGIs... the stunts were seamless. It has been rated as PG 13 but I felt that it should have been U. Nothing gory or vulgar here ^.^ I was fully immersed into the movie even though I was actually tired… it was that GOOD for me! It’s also realistic… including the aliens and costumes! Except for the lantern part... where the ring needs to be charged always... sounded like rechargeable battery o.O

The right casts… especially Ryan Reynolds and Blake Lively (didn’t realized it was THAT girl from Gossip Girl) made the movie more steamingly interesting... the chemistry was good. Ok ok… I admit it… Ryan was worth watching too… especially those 6 (or was it 8) packs… if only Green Lantern was for real… I choose you, my superhero in green... *dreaming*


Not too sure why they received some negative reviews… probably too much high hopes or overly anticipated it =.= Anyway, I can’t wait for the sequel!