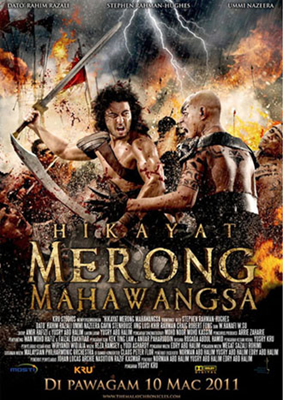 The Malay Chronicles: Bloodlines (aka Clash Of Empires: The Battle For Asia in the United Kingdom) is a 2011 Malaysian epic action film loosely based on the 16th century historical document of the same name. Released in Malaysia under the Malay-language title Hikayat Merong Mahawangsa, the film is directed, co-written, and co-produced by Yusry Abdul Halim. Narrating the early history of the state of Kedah, it stars Stephen Rahman Hughes as Merong Mahawangsa, who escorted Prince Marcus Carprenius of the Roman Empire to Langkasuka to marry Princess Meng Li Hua from the Han Dynasty of China, thus uniting the two powers of east and west. The aim for the making of this film is to introduce the rich history and culture of the Malay world internationally. This film is produced and distributed by KRU Studios.

The budget for this film is estimated at around RM8 million, the second most expensive film ever made in Malaysia behind Puteri Gunung Ledang (which costed around RM16.6 million). This film uses CGI technology to save costs and to reconstruct the Malay Archipelago in 2nd century A.D.

Surprisingly for a local movie, the sceneries, story line and actions were really good. As for CGI, some were realistic and some were not. I guess it was overdone especially the blood spurting around part =.= It’s spoken in 3 languages i.e. Bahasa Melayu, English and Mandarin. I find it a little dull for some parts… not sure if the story was a little dragging or the way they spoke. They spoke in the old Bahasa Melayu which was a tad too dull for me. I had to also re-focus to understand it. Should have watched it when I’m not tired though… sorry if I had offended anyone, this is just my POV.