Triple H has jumped on the ‘serious acting’ bandwagon, same like his fellow wrestlers The Rock and John Cena. 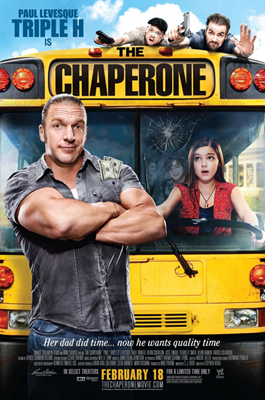 Ray Ray Bradstone has recently been released from prison, turned over a new leaf and hoping to be united with his ex-wife and daughter. Unfortunately, his previous partner in crime came looking for him, hoping they will team up again to rob banks. Ray insisted he has changed hence he has no intention to go back to his old crime ways. He tried his best to make up for lost time with his daughter, Sally, hoping they will bond like how they used to. As Sally was still pissed with him and he couldn’t find any job, Ray had no choice but to go back to his old ways to make some money. All hell breaks loose when he finally quit, while robbing a bank, leaving his crime partners in the lurch.

A big guy in a sappy movie, which was humorous yet educationally with good intentions. A definite good movie to watch with the family. Don’t expect much though for the story line as it’s a simple ‘father regrets previous action and tried to make it up with wife and kids’ predictable kind. Triple H was a little stiff in some parts… probably due to his huge size. Overall it was a good stepping stone in the right direction for him, similar to Dwayne ‘The Rock’ Johnson, who has been doing pretty well in the cinemas with good family movies.

On a personal note, not a happy day today… hmmm… actually the past weeks, busy as ever doing dumb and shitty work. I was so happy talking to my angels just now… they totally lighten up my mood! Wished God will bless me, letting my dream come true, to be a WAHM. ASAP!!! Honestly… I’m slowly going bonkers… really wished I have magic to terminate those who are irrelevant, stoned those who are irritating, shut those who are noisy… the list can just go on and on… sigh!

Dear God, please give me strength to move one, a peace of mind and hope for a better tomorrow. Amen.