Thanks to Eric, we got free tickets to watch a movie of our choice at a GSC cinema! Eric wanted to watch Big Mommas so me and Ann obliged lor… 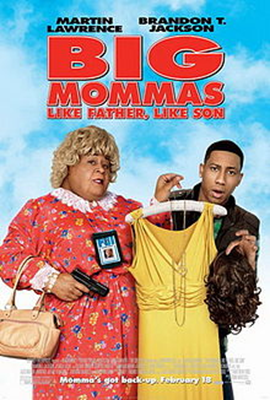 Malcolm is happy that his stepson, Trent, has been accepted into Duke University. However Trent only wants to be a rapper. With their differences in the way, they got entangled in a case Malcolm has been working on and eventually had to go undercover as women to get a flash drive, the only evidence to put away a Russian Gangster named Chirkoff. Malcolm puts on his suit again as Big Momma, has to work as den mother in a prestigious all-girls school and Trent passes off as Big Momma’s grand niece, Charmaine. As Malcolm works his way through to find the flash drive, Trent is trying his best to woo Haley, one of the talented students. All hell breaks loose, this partnership actually brought both Malcolm and Trent closer.

Similar to Big Momma 1 and 2, it’s totally hilarious! A good de-stressing movie! I was laughing so hard even though I wasn’t feeling well that day (Been having headache for the past weeks). The plot may be predictable but the focus is more on Trent/ Charmaine this time around… which is a good choice or we could feel boring watching too much of Big Momma again. I just loved the duet Trent and Haley sang… a very nice, soft and subtle romantic song.

You're welcome!
It was a FUNNY movie indeed!!! muahahhahah

Thanks for the review. This is the place i look forward to every time there's a new movie!! hehehe