I had to convince Tyger for so many days to watch this movie =.= His reason for not wanting to watch was due to the scary Death Eaters *slaps forehead* After explaining that these are all CGI’s, he quickly said ‘Wait mommy, I’ll Google search for CGI’ *head bang* Finally… he relented and we watched it last Wednesday night at Sunway Pyramid. 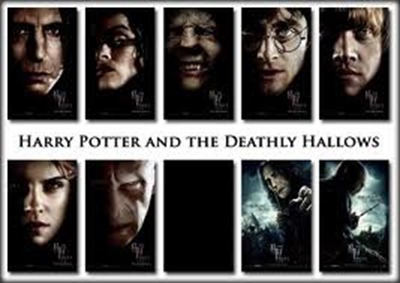 It started off with news of Death Eaters eliminating many Muggles. Hermione had no choice but to ‘obliviate’ her existence to save her parents. Harry had to send his uncle and family away for their safety. Mad Eye and the gang gathered at Harry’s house, planning his escape to the burrows unscathed. Their plan was for a few of them to drink Polyjuice and turn into Harry in a bid to confuse the Death Eaters. It turned out a failure as someone had tipped Lord Voldemort. The real Harry was with Haggard, fought off Voldemort with the help of Hedwig. They finally reached the burrow safely and the rest survived too except for Mad Eye; he was killed by a Death Eater. Subsequently Harry, Ron and Hermione planned to leave the burrow after the wedding, in pursuit of destroying the remaining Horcruxes, as what Dumbledore would want them to.

An adventurous drama with exciting plots, gave me a fright a few times! The taping was quite shaky though somewhere in the middle which gave me a headache! Not sure if that was intentional. Anyway, the only unrealistic part for me was when Ron saved Harry from the freezing cold water… they weren’t as cold after they climbed out and were not shivering at all o.O Other than that, it was a beautiful and enthralling movie… can’t wait for part 2 next year!