Last Wednesday, before movie night, I had a horrific afternoon. We were in Carrefour TCM when Princess insisted to eat noodles cooked by a promoter. She had 2 helpings already and still asking for more. I said no, knowing that she’s hungry, wanted to go to the cashier to pay and look for something to eat. MIL insisted that it’s ok for a few more helpings since she’s a small girl… the promoter wouldn’t mind. With that, Princess happily went over with Tyger in tow. MIL stood at the other end of the aisle waiting for them. After 5 mins or so, I came back after fetching a bottle of Nutella and all were missing! Met MIL mid-way, she was searching for them! Horror!!! Panic!!! Where could they be??? I went through all the aisles, up and down but I can’t find them!!! After a few mins, I saw both of them walking towards me… looking relieved when they spotted me!!! I quickly ran towards them… started scolding them for wanting free food and wandering around!!! Tyger explained that he couldn’t see us when they were done hence went looking for us. Hmmm… it really felt as though we were all blinded for a moment even though we were nearby. It was totally a terrible and harrowing moment which I never, ever want to experience again!!!

Back to the movie… 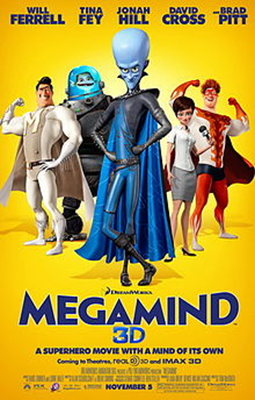 Megamind is an alien from another planet, landed on Earth when he was 8 years old, same as Metroman. However, Metroman landed in a rich man’s home whereas poor Megamind landed in prison. As they grew up, Metroman became a hero whereas Megamind tried to fit in. In the end, Megamind decided to become a villain and the story unfolds. Metroman always saves the world whereas Megamind tries to destroy both the world and Metroman.

A villain with a conscious, who in the end has the leading lady and becomes a hero. Short and simple

An educational movie, funny yet emotional at times… entertaining to the max! Both Tyger and Princess totally enjoyed it! Even the 2 men sitting next to us were laughing to the max!!!